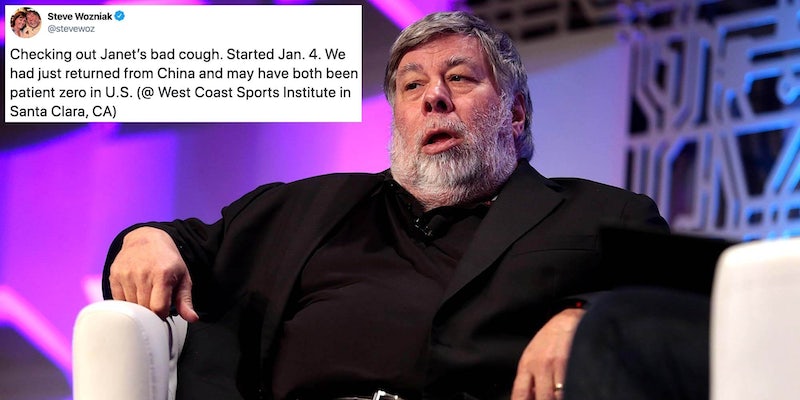 The Apple co-founder says his wife came down with a 'bad cough' after a trip to China.

Apple co-founder Steve Wozniak believes that he and his wife may be responsible for bringing the coronavirus (COVID-19) to the United States.

Wozniak made the bold statement on Twitter Monday, announcing that his wife Janet had come down with a “bad cough” following a recent trip to China.

“Checking out Janet’s bad cough. Started Jan. 4,” Wozniak tweeted. “We had just returned from China and may have both been patient zero in U.S.”

The entrepreneur’s tweet also suggests that the couple opted to get checked out by a physical therapist at the West Coast Sports Institute in Santa Clara, California.

Wozniak’s tweet did not mention whether his wife was experiencing other symptoms or if he also felt ill.

Santa Clara has seen 9 confirmed cases of coronavirus so far, with around 100 total in the U.S. The technologist’s statement comes not long after the sixth death linked to the disease was announced, all of which came from Washington state.

Worldwide, 90,284 cases of coronavirus have been confirmed, and the global death count is 3,085.

Wozniak has not commented further on the situation following his initial tweet.