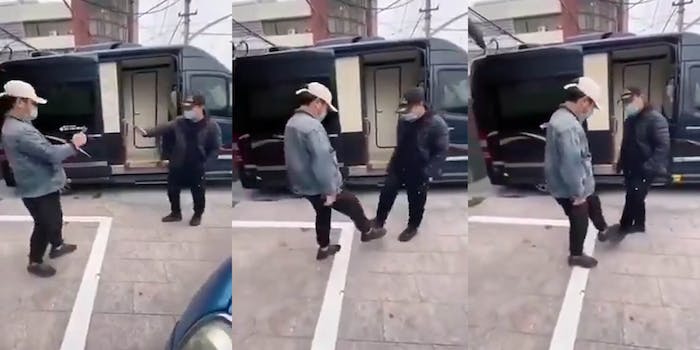 Foot-tapping is the new handshake during coronavirus

It's been dubbed the 'Wuhan shake'.

Amidst coronavirus fears, a video has gone viral of the “Wuhan shake”—a foot-to-foot greeting people in China are using instead of a handshake.

In a clip on Twitter, a group of men wearing face masks can be seen saying hello to each other by quickly tapping their feet together. The first man is shown waving off a handshake invitation and offers his foot instead. He is then greeted by a foot tap instead. The “foot greeting” is then continued throughout the video with three different people.

The video now has about 29,000 views. Many on Twitter have applauded the creative new adaption to the old school greeting and welcomed the humor during the serious global situation.

“People in China found another way to greet since they can’t shake hands,” wrote one user alongside a video of the “Wuhan shake,” named after the city in China that’s at the center of the epidemic.

“Be prepared for a mass outbreak of athlete’s foot! Gonna call it OldFeet-19,” joked one user.

“All I could think of was this flashback,” one user wrote when sharing a video of the ’90s hip-hop duo Kid ‘n Play.

The Wuhan shake has emerged as health officials worldwide have been discouraging physical contact amid the coronavirus outbreak.

According to the New York Post, over the weekend, both the French and Italian governments have advised against the physical greetings customary with their cultures as a means to prevent the deadly virus.

Newsday has reported that the virus has spread to over 60 countries, infected more than 89,000 people and killed over 3,000 since the outbreak began in December.