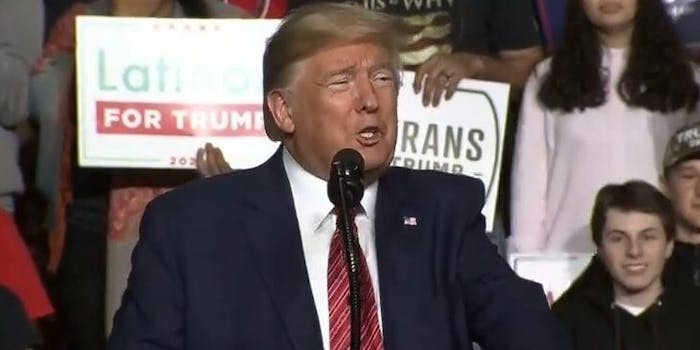 Did Trump call the coronavirus a ‘hoax’?

Depends who you believe.

During the speech, Trump went into a lengthy diatribe about the new strain of coronavirus, COVID-19. He slammed Democrats for politicizing the virus and his administration’s response, which he characteristically described as “one of the great jobs.” Then he ranted a bit about Russia and impeachment before returning to coronavirus.

“This is their new hoax,” he said, then congratulated himself some more.

“Trump rallies his base to treat coronavirus as a ‘hoax,’” Politico wrote.

“Is coronavirus panic a hoax?” asked an op-ed in the Hill.

Democrats similarly seized on the quote. Former Vice President Joe Biden called it “dangerous” and “bizarre” for Trump to use the word “hoax.”

Trump’s response: I didn’t mean what they think I mean.

At a Saturday morning press conference, a reporter asked the president if he regretted his word choice. He responded that he said “‘hoax’ referring to the action that [Democrats] take to try and pin this on somebody because we’ve done such a good job. The hoax is on them.”

Facebook appears to have taken Trump at his word. When people share the aforementioned Politico article, it now warns that it is “false information checked by independent fact-checkers.” (This warning did not appear when posting the Hill’s op-ed.)

The link to “see why” didn’t work on any of the Daily Dot’s multiple attempts.

Trump’s supporters celebrated the Facebook disclaimer as a win. ” It’s a start,” Donald Trump Jr. tweeted. “… Of course the rest of the media is still running with a lie but no one expects that to ever change.”

So what’s closest to the truth? Did Trump call the coronavirus a hoax? Or did he just say that Democrats’ warnings and criticisms were a hoax?

The answer isn’t as clear as either side argues.

It is true, as Trump asserts, that he was referring to Democrats’ statements about coronavirus as “their new hoax.”

It’s not clear what statements Trump is flagging, but Democrats have been critical of his decision to appoint Vice President Mike Pence in charge of the response, and have been upset with the president downplaying concerns over the virus.

Trump himself has repeatedly downplayed the risks, at times contradicting his own health officials and undermining their warnings to the public. He’s also drawn misleading comparisons between coronavirus and the flu, including in the speech in South Carolina.

In his first public conference on the coronavirus, Trump also compared it repeatedly to the flu.

Trump faces mounting criticisms of his administration’s handling of coronavirus. A whistleblower accused federal health officials of interacting with infected people in California without proper training or preventative gear. The government infamously initially refused to test the patient who turned out to be the first to contract the disease within the U.S. Some have questioned putting Vice President Mike Pence in charge of the federal response and communications. Last week, Science Magazine said the government “badly bungled coronavirus testing.”

On Saturday, the Washington Post published a story characterizing the coronavirus response as “a White House scrambling to gain control of a rudderless response defined by bureaucratic infighting, confusion and misinformation.” For the piece, the Post spoke with nearly two dozen current and former administration officials and aides, lawmakers and public health officials.

Many believe that Trump is more concerned about how coronavirus will affect his popularity than the well-being of the American people.

Democrats have warned the delayed and flawed response, contradictory public statements, and other missteps by the federal government could contribute to more people getting infected. This to Trump is a hoax.

So while it is pretty clear that Trump wasn’t saying that the existence of coronavirus is a hoax, it’s also pretty clear that he was accusing Democrats of overstating the seriousness of a virus that has infected nearly 90,000 and killed nearly 3,000 in more than 50 countries, including the U.S., in the little more than two months since it was discovered. And that’s no hoax.