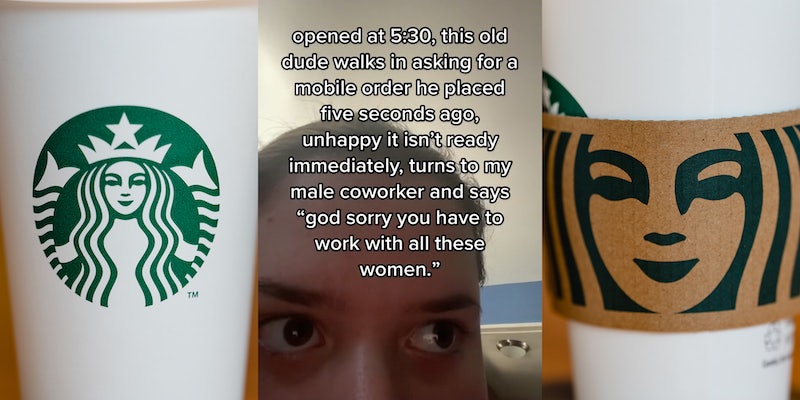 ‘Sorry you have to work with all these women’: Starbucks barista says customer got sexist after his mobile order wasn’t ready 5 seconds after he ordered

'There should be no time where a sexist comment should be made over COFFEE.'

In a viral TikTok, a Starbucks barista said a male customer made sexist remarks when his order wasn’t ready “five seconds” after he ordered it.

The viral video, which has over 310,500 views and was posted in July by TikToker Jenn (@ayo.riha.check), shows the TikToker’s face zoomed in and looking frustrated.

“Opened at 5:30, this old dude walks in asking for a mobile order he placed five seconds ago, unhappy it isn’t ready immediately, turns to my male coworker and says ‘god sorry you have to work with all these women,’” the TikToker wrote in text over the video.

“I hate people, but even more specifically old entitled white men,” the TikToker captioned the video.

Viewers in the comments section debated how they would have reacted to the sexist comments.

“I would’ve lost my job,” one user commented.

“I would have been like ‘you do realize you came from a women right?’” another argued.

“Hell nah I wouldn’t let that slide,” a third replied.

Another user asked how the barista’s co-worker reacted to the sexism.

“No but what did that male co worker say cause I’m swinging,” the user asked.

“Hes the best he literally said to the dude ‘don’t say that’ to which the old guy responded ‘i have two daughters four granddaughters and a wife,’” the TikToker replied in a comment.

The TikToker told the Daily Dot she was shocked the man brought his female family members into the discussion. She said the man still comes back to her store, and although she doesn’t treat him differently because of what he did, she will always remember what he said.

“This was really the first time in public i’ve experienced something like this, especially in my work environment, and I was actually so shocked that some people have the audacity to say things like that. I mean it was literally 5:45 in the morning, none of us did anything wrong, and for him to make that comment? Honestly super uncalled for. We deal with disrespectful customers all the time [saying] ‘I’m in a rush i really need my drink now, I mobile ordered i thought it would be ready at this point.’ However, I couldn’t shake how I felt about this customer’s comment because of not only how he views women working, but also how he views his own family,” the TikToker explained.

As previously reported by the Daily Dot, other baristas have taken to TikTok to discuss their bad experiences with customers. Specifically, Starbucks baristas have complained about how stressful the morning rush can be for doling out mobile orders.

Recently, Starbucks workers have also gone to TikTok to discuss overall working conditions at Starbucks locations, amidst widespread unionization efforts by Starbucks workers across the country this year. About 200 Starbucks stores have unionized so far.

“I feel like overall, rude customers are going to be a constant no matter what Starbucks you work at, but I do feel to a point these workers go through so much throughout the day that it isn’t right for them to have to brush it all off their backs…I feel like if this man persisted on making comments, then it would be time to go to management or higher, but if there are baristas out there constantly getting treated poorly by patrons or verbally harassed by regulars, speak out and say something because no one should stand for that kind of treatment in their own workplace. You are being paid to do a job, not to get put down,” the TikToker told the Daily Dot.

“I believe respect comes from both places in a business, the customer and the worker. However, there should be no time where a sexist comment should be made over COFFEE, it’s trivial,” the TikToker said.

The Daily Dot reached out to Starbucks for comment via email.