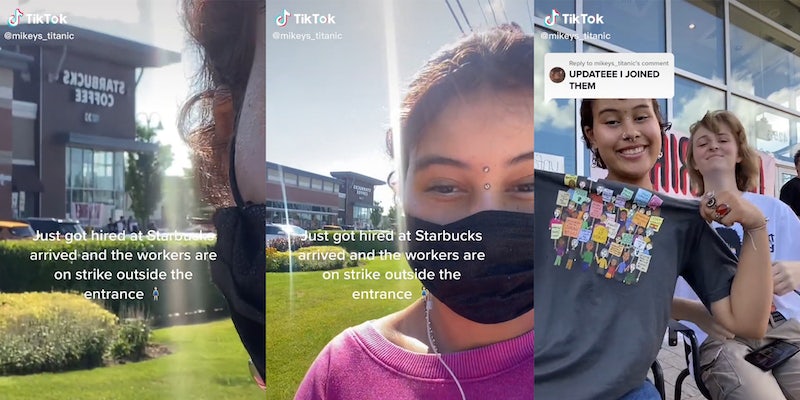 ‘Should i pick up a sign orrrr…’: Worker arrives to first day on job at Starbucks. Baristas are on strike outside (updated)

'LMAOOOO the timing of it all.'

In a viral TikTok, a new Starbucks worker said she went in for her first day at work and found workers on strike outside.

The viral video, which has over 640,100 views and was posted earlier in the week by TikToker Mikey (@Mikeys_Titanic), shows the TikToker walking toward a Starbucks store where protesters wait outside.

“Just got hired at Starbucks arrived and the workers are on strike outside the entrance,” the TikToker captioned the video. “Should i pick up a sign orrrr…”

Viewers in the comments section encouraged the worker to join the union strikers and debated the unfortunate timing of the worker’s first day.

“Join their union,” one user commented.

“LMAOOOO the timing of it all,” another replied.

At first, the TikToker seemed hesitant to join in.

“I’m just going in to sign papers and stuff I don’t wanna get fired before I even get hired idk imma look into it,” the TikToker replied to the comments.

However, in a follow-up video later in the day, the TikToker shows herself wearing a union shirt with the workers outside.

“UPDATEE I JOINED THEM,” the TikToker said in her update video. “SLAYYYY.”

In another follow-up video, the TikToker says she went into the Starbucks location on strike for training, but the store she will be working at is at a different location.

“They wanted to unionize, and I was like, ‘I’m for the people. I’m gonna join.’ So, they gave me a shirt,” the TikToker says in her video. “Anyways, I’m not a scab [a person who works despite an ongoing strike]. … I’m not a replacement. It’s not even my store. … I’m supposed to train at this store before I go to my home store.”

In another video, the TikToker shows a flyer with further details about the strike, which lasted from July 29-31, at the Starbucks location on Genesee St. near Buffalo, New York.

“We, the workers at 4255 Genesee St. Starbucks are going on strike over Starbucks’ lack of appreciation for our hard work and continued unfair labor practices from the local to the national level—including but not limited to understaffing at the store, overworking baristas and shift supervisors during shifts, frequently closing the store early and avenues of sale due to understaffing, transfers to other locations being denied and those workers being forced to quit, store hours being cut, conditions driving our team to quit and find other jobs, and some being scheduled to work up to 6 days in a row with only short shifts because Starbucks does not desire to give out thirty minute breaks,” the flyer reads.

According to a tweet by Starbucks Workers United (@SBWorkersUnited), a unionizing collective for Starbucks workers, the Genesee St. location was the second Starbucks location to fully unionize in January. This location is the fourth location in Buffalo, New York, to go on strike in July, according to WKBW. Unions only go on strike after a vote is taken and a majority of workers vote in favor of the strike.

In a statement to the Daily Dot about the viral video posted by TikToker Mikey, Starbucks Workers United said workers at the Genesee St. location said the following: “We were so excited to welcome [Mikey] to our store and especially excited to have them out there picketing with us! This was an awesome example of worker solidarity and how we’re stronger together.”

The strike comes amidst widespread unionization efforts by Starbucks workers across the country this year. About 200 Starbucks stores have unionized so far.

In May, Starbucks announced it will raise wages for employees. However, it said it would not offer improved benefits to workers at unionized stores, saying it needs to bargain with unions prior to making benefits changes. However, Workers United said Starbucks can offer unionized employees benefits without bargaining with union approval, according to CNBC.

The Daily Dot reached out to Starbucks, TikToker Mikey, and the National Labor Relations Board via email.

Update: 12:55pm CT, Aug. 3, 2022 After the publication of this article, TikToker Mikey spoke to the Daily Dot in a phone interview about her experience, saying the article did a good job summing up what happened with the strike. She confirmed she was nervous when she first showed up to work to find the strike and no manager in sight for the training that was supposed to occur—but was then glad to join in to learn more about the strike and union efforts.

She said the manager at the other store location she was to permanently work at was surprised to hear the strike was going on, and eventually invited her to come back to their location to sign paperwork and get started. She also said she is unsure if the strike at the Genesee St. location ended up winning more rights for the workers there.