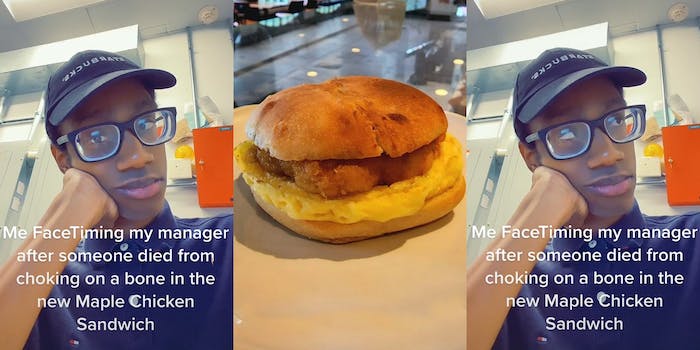 ‘I’m in urgent care rn with possible listeria bc of it’: Did Starbucks secretly recall its new chicken sandwich?

'If you’re honestly feeling sick after eating the new maple chicken sandwich, you should go to the hospital.'

Update 2:08pm CT, June 30: In an email to Daily Dot, Starbucks confirmed it issued a voluntary stop sell and discard order on its Chicken, Maple Butter, and Egg Sandwich on Sunday.

Its stated reason was that it did not meet Starbucks’ quality standards. It specified that the recall was not issued by the FDA, nor was it related to listeria or salmonella.

As a result of this recall, stores may be temporarily out of stock, and Starbucks encourages customers to speak with their barista about a replacement that meets their preferences.

Starbucks also noted that if customers have questions, they can reach out to the Starbucks Customer Contact Center at 1-800-782-7282.

Original story: Last week, Starbucks unveiled a new sandwich that featured chicken, maple butter, and egg. Now, people online are complaining that the sandwich made them sick—and no one can find the sandwich anywhere.

This is leading users online to ask the question: Did Starbucks recall the new chicken sandwich?

Users on Reddit certainly seem to think so. Discussion on /r/Starbucks has been dominated by the sandwich over the past few days, with many users coming to a consensus that the sandwich was recalled.

“Yes, there was announcement this morning to discard all chicken sandwiches company-wide,” claimed a commenter, who is a longtime member of both the /r/Starbucks and /r/starbucksbaristas communities. “No specific reason other than ‘quality control.’”

Other users alleged their stores were “visited” to ensure sales stopped, with some claiming they had to discard any remaining sandwiches. A Twitter post alleging to show the recall notice appears to verify this, saying the product “does not meet Starbucks quality standards.”

The specific reasons behind the alleged recall are unclear. While some on Reddit reported feeling ill after eating the sandwich, others allege that there were a range of problems with the new sandwich that led to it being pulled, including an allegation that “some had bones & tendons, some were raw inside.”

A Reddit post on the /r/Starbucks subreddit claims that an employee found a bone in their sandwich. At least one user on Twitter alleged the sandwich was served undercooked, posting a photo of the sandwich and tagging Starbucks in the post.

There were also claims made about listeria being found in the sandwich, though several users on Reddit claim this is unlikely.

Regardless, many users on TikTok are claiming the sandwich made them sick. Under a video on the topic posted by user Kendall (@cl0wn3n3rgy), TikTokers shared their experiences with the potentially-discontinued sandwich.

“I’m in urgent care rn with possible listeria bc of it,” one user claimed.

“Not my husband and I getting sick and canceling our vacation,” another alleged.

“I had it on my break the other day…bro I’m fighting for my life rn,” another user added. “Lmfao my stomach is not happy.”.

“If you’re honestly feeling sick after eating the new maple chicken sandwich, you should go to the hospital to be checked for listeria,” Kendall wrote in the comments of the video.

We’ve reached out to Starbucks via email and Kendall via TikTok comment.