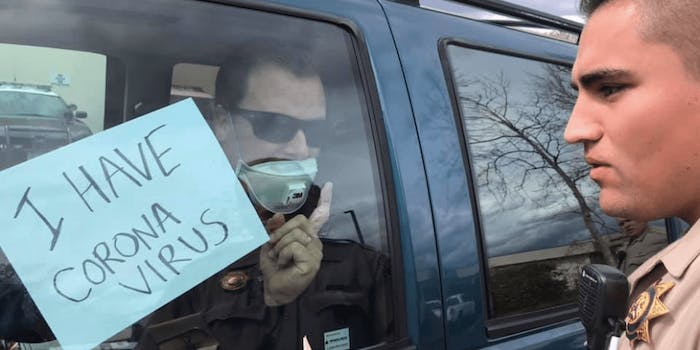 Police officers get roasted over ‘I have coronavirus’ sign

Even Ice T had something to say.

In spite of the increasing fatalities from coronavirus, people are still finding ways to lighten the mood. A photo of a police officer wearing a face mask and holding a sign that says “I have coronavirus” is going viral on Twitter—and getting absolutely roasted.

The photo was originally posted on the California Highway Patrol of Castro Valley’s Facebook page. The photo is captioned “Nice try…” and notes that the incident was a “staged” traffic stop.

The photo spread rapidly on Twitter, though not everyone seemed to know it was staged.

But not everyone found the photo amusing. Some thought it was inappropriate to make jokes about a disease that, according to the New York Times, has already affected more than 110,200 people in 97 countries.

“I don’t think joking about a deadly virus from first responders is funny at all,” one Facebook user commented on the photo.

As the coronavirus spreads in the U.S., people are becoming increasingly wary of their health and the seriousness of the disease.