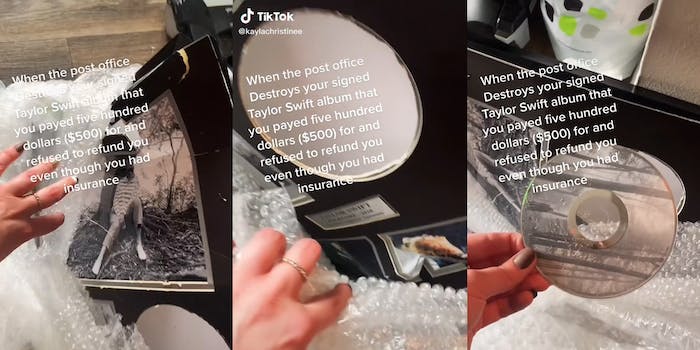 'It’s been about two or three months since I filed a claim on it.'

One Taylor Swift fan is seeing red after she says the United States Postal Service (USPS) refused to pay up after delivering her some fan memorabilia that got destroyed during the shipping process.

In the video, Kayla Christine (@kaylachristinee), unboxes a signed Taylor Swift album. Instead of revealing a pristine collector’s item she paid for, she is left with the frame all bent up.

Items supposed to be placed inside of the framed piece are scattered throughout the box. The package itself looks beat up as well.

“When the post office destroys your signed Taylor Swift album that you paid $500 for and refused to refund you even though you had insurance,” she wrote in the text overlay of the video, which now has 2 million views.

Questions and support filled her comments section. She even answered some comments with other videos on her page.

“Hope this get resolved… but since its all busted… you should let us know if the CD actually plays,” one person wrote.

In the video response, Christine shows that the front of the album is scratched up but says that it wouldn’t have played anyway because the album was put in as a collector’s item and has adhesive on the back (something supposed to keep the piece together and the CD inside the frame).

“So, no it would not play,” she explains.

In another video, she explains what she has done in hopes to get a refund from the USPS.

“It’s been about two or three months since I filed a claim on it,” she says. “They have not sent me any paperwork stating why they had failed to give me my money back.”

“I’ve honestly just decided to remake it,” she continues. “Spending more money on top of that.”

Taylor Nation seems to have their eyes on the story, too. Many tagged the celebrity in the comments asking her to help this superfan.

“Taylor Swift get this girl another one,” one person wrote.

The Daily Dot reached out to Christine via her comments section and to USPS via email.