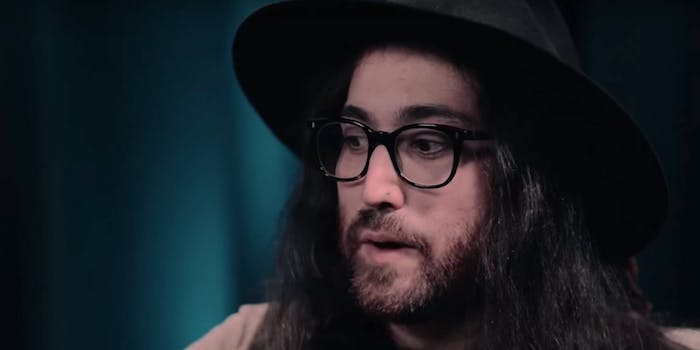 Well, that went about as expected.

Mansplaining: the portmanteau that puts a name to this guy trying to tell an actual astronaut about basic physics. It’s a term that highlights rampant sexism seen far and wide, from our political elections to our day-to-day lives. But, is it sexist?

That’s what musician Sean Lennon seems to believe, as he indicated on Twitter Friday night.

The term 'mansplaining,' is sexist.

Naturally, followers were curious. Could this man mansplain why mansplaining is sexist?

Wait a minute. I'm so lost. Could you start from the beginning?

Someone told me I was mansplaining when I realized the term is inherently sexist.

And rightfully, he got owned.

Hmm… still confused. What is "sexism?" What is "mansplaining?" What's it like being a woman?

Perhaps the most troubling series of missives following the “mansplaining” tweet came not from Lennon, but from accounts he retweeted calling out @Globelamp, aka Elizabeth Le Fey, a former member of the psych-rock outfit Foxygen who dated and was allegedly abused by frontman Sam France. The two have become publicly embattled after Le Fey called for a boycott of Desert Daze, a Joshua Tree festival she is legally barred from enjoying due to Foxygen’s participation. This was Lennon’s response:

Not only is Sean Lennon super intelligent but he was apparently with me at all times when I was hit in the face and framed in court. He seems to think he knows exactly what went on in my personal life and how it effected me. Strange since I don't ever remember meeting the guy, he seems to know exactly what happened to me and feels entitled to tell me to stop protesting desert daze because his friends run it. Oh wah wah your poor friends, Sean! Gee you are right, since hitting your girlfriend was acceptable during Woodstock, we should definitely apply that mentality to now. Very progressive. This might be one of the dumbest things Ive read in a long time. This is exactly why I won't be quiet and why we need change. Thank you Sean for making that even more apparent.

Needless to say, Lennon hasn’t been shy about his problematic opinions, though he did bother to delete the Hendrix tweet, which Le Fey preserved via Instagram.

Place your bets on when he takes down the “mansplaining” tweet. And when it pops right back up for the sake of accountability.