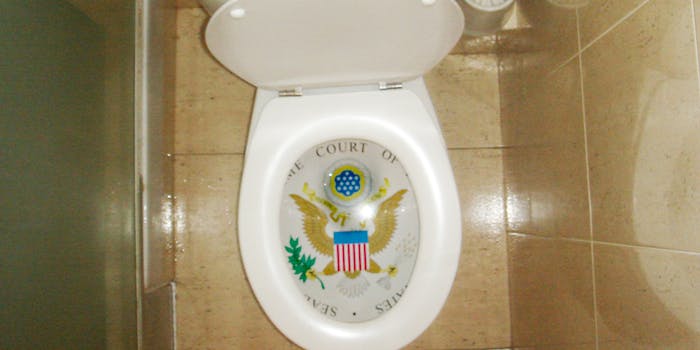 On Wednesday, the Supreme Court ruled 5-3 to block a decision granting a transgender student access to the bathroom of his identifying gender.

Back in April, a federal appeals court ruled in favor of Gavin Grimm, a 17-year-old transgender boy from Virginia, allowing him to use the bathroom of his choice at Gloucester High School. The court cited guidance from the Obama administration that mandated transgender students be allowed access to appropriate restrooms in accordance with Title IX.

But on Wednesday, the Supreme Court interrupted what seemed like an already-decided case and a progressive trend towards transgender student equality, by granting an emergency appeal from the Gloucester County School Board, which wants to be exempt from Obama’s mandate.

Though this block is not an official ruling, Justice Stephen G. Breyer said he would put the issue on hold as a “courtesy” until the justices return in the fall.

On Thursday, as news spread that the SCOTUS hold would prevent Grimm from using the boys’ restroom, advocates offered support on social media using the hashtag #LoveForGavin.

Sending #LoveforGavin, who has been courageously fighting just so he can go to the bathroom at his school like other students–in peace.

Adults are using their authority to recklessly & needlessly harm a minor. We should all be disgusted. #LoveforGavinhttps://t.co/3tQxJ5G4M9

School is hard enough without communities shaming you 4 who you are. Gavin has endured so much vitriol & hate but leads w/love #LoveforGavin

“Every day that transgender young people are being singled out and separated from their peers is a day too long,” said Lambda Legal CEO Rachel B. Tiven in a statement emailed to the Daily Dot. While the ACLU sued on behalf of Grimm in the federal appeal, Lambda Legal filed a brief in the case as well, supporting trans student bathroom access.

In a January blog post for the ACLU website, Grimm wrote that having to fight for his access to the bathroom amid rooms full of adults arguing against him has been “terrifying.”

“At age 15, I had to witness adults of my community discuss in a public forum some rather intimate details of my anatomy,” wrote Grimm about the Gloucester School Board meetings that started it all. At those meetings, wrote Grimm, he was misgendered by adults and referred to as “confused”—even as a “freak.”

“I am fighting this fight because no kid should have to think so hard about performing a basic and private function of being alive,” Grimm wrote. ” I hope that I will be one of the last kids that has to go through something like this, and I am going to do what I can to ensure that.”

The Supreme Court is likely to address the case again when it meets in the fall. Grimm will then be entering his senior year in high school.