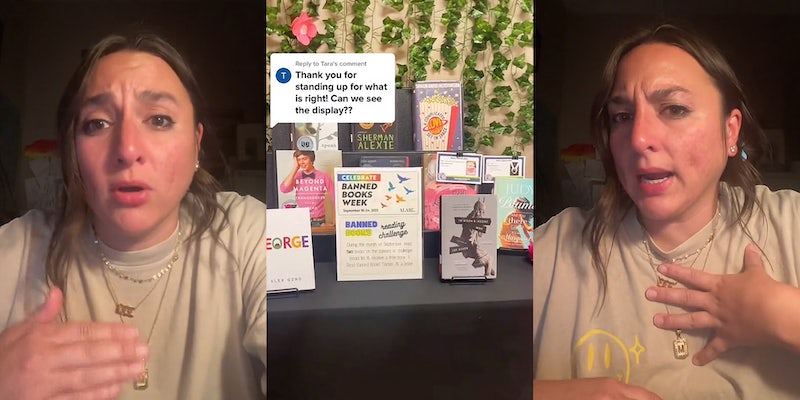 ‘I am not upset. I’m enraged’: Administration asked school librarian to take down banned books display after one parent complained

'I serve over 700 students, not one student alone.'

A school librarian has gone viral on TikTok after claiming that her school’s administration asked her to take down a display on Banned Books Week at the request of a parent.

In a video with over 855,000 views, user Mia (@miarwilson3), a Texas-based librarian at a Belton ISD middle school, alleges that she was approached by her principal the day before school started. During this confrontation, he told her that she needed to take down a display that featured banned books in honor of Banned Books Week, held from Sept. 18 to 24.

Banned Books Week is an annual celebration of “the freedom to read,” which is honored by highlighting literature that has been frequently challenged. Banned Books Week is supported by numerous groups like the American Library Association (ALA), American Society of Journalists and Authors, Amnesty International USA, and others.

“…Most libraries in the world celebrate Banned Books Week,” she says in the video.

The principal then requested that Mia “keep things academic.” Mia then asked if that meant she needed to take down her other displays, which featured topics like superheroes. The principal allegedly did not have a response besides remarking that he did not really notice the displays and that his request was merely an attempt to be in the parents’ good graces.

Mia says she then proceeded to inform the principal that the school has a process in place for singular book removal requests and that she can assist in the process if the parent so chooses.

“It’s not about taking away a parent’s autonomy,” she explains in the video. “Your kid definitely does not have to read those books. However, this is an opportunity to bring awareness and information and knowledge to kids when they might not otherwise have it.”

At this point in the conversation, Mia began to cry, to which the principal allegedly responded that it was okay to be upset.

“I am not upset,” she claims to have responded. “I’m enraged…I’m mad because people want to take away books that largely feature marginalized people!”

Some of the titles featured include “Bridge to Terabithia,” “Twilight,” “A Complicated Love Story Set in Space,” and others.

The specific reasons for banning vary. Among the most stated issues revealed by Mia in her video are “sexually explicit” themes, “LGBTQIA,” “woke,” and “critical race theory,” an amorphous conspiracy theory that gained traction in conservative circles last year.

Mia’s story comes on the heels of several other stories about conservative groups attempting to censor literature in American public schools.

Earlier this year, The Guardian reported that “conservative groups across the US, often linked to deep-pocketed rightwing donors, are carrying out a campaign to ban books from school libraries, often focused on works that address race, LGBTQ issues or marginalized communities.”

“Groups purporting to be ‘grassroots’ efforts have frequently led the charge, petitioning school boards or elected officials to remove certain books,” author Adam Gabbatt writes. “Though some of these organizations present themselves as a local effort that sprang up around groups of parents united behind a cause, many of the groups involved in banning books are in fact linked, and backed by influential conservative donors.”

These groups appear to work by putting money into information campaigns and promoting their figureheads through mainstream conservative channels.

As an example, the article cites Parents Defending Education vice-president Asra Nomani, who has “appeared on Fox News to rail against some books, including “Woke Baby” and “Gender Queer,” being in Virginia libraries.”

Furthermore, despite billing itself as a “grassroots organization,” the group has documented ties to “deep-pocket conservative money and influence,” per Gabbatt.

The work of Parents Defending Education and other groups like it has been effective. In Texas, where Mia is based, “books on race and sexuality are disappearing from…schools in record numbers,” NBC News writes.

“Records requests to nearly 100 school districts in the Houston, Dallas, San Antonio, and Austin regions — a small sampling of the state’s 1,250 public school systems — revealed 75 formal requests by parents or community members to ban books from libraries during the first four months of this school year,” author Mike Hixenbaugh details. “In comparison, only one library book challenge was filed at those districts during the same time period a year earlier, records show.”

Mia’s district is among those affected, she reveals in a follow-up.

“This issue is not just happening at my campus in my district. This is going on in our entire school district, not just in secondary schools but elementary schools as well,” she shares. “Right now, we have six books that have been censored by our district admin team from one of our high schools.”

This video also provides an update on her situation with the principal. Mia claims that the principal talked to her to review the matter, with both staying steadfast in their positions. The principal also allegedly contacted the concerned parent about talking with the librarian directly. The parent seemed opposed to the idea and insisted the principal do something by themselves, Mia says the principal told her.

A representative from Mia’s school told the Daily Dot that they could not comment specifically on the incident.

“In Belton ISD, we strive to provide exceptional learning experiences for each and every student and for every employee to feel valued, supported, and engaged,” they said. “We cannot comment on specific personnel matters. If an employee has a workplace concern, they are always encouraged to follow the process outlined in our policies.”

Mia’s banned book saga set off a firestorm after it was posted on TikTok, with many users jumping into the comments to voice their support.

“How enraging that one parent thinks their opinion should change the library for the whole school,” one user wrote.

“Way to stand your ground and communicate your stance,” another shared. “This is so important.”

Naturally, many pointed out the irony of trying to remove a Banned Books display—thus demonstrating the importance of Banned Books Week in the first place.

As one user wrote, “them wanting to ban books and censor them is the exact reason why banned book week is so important.”

The Daily Dot reached out to Mia via phone and email.