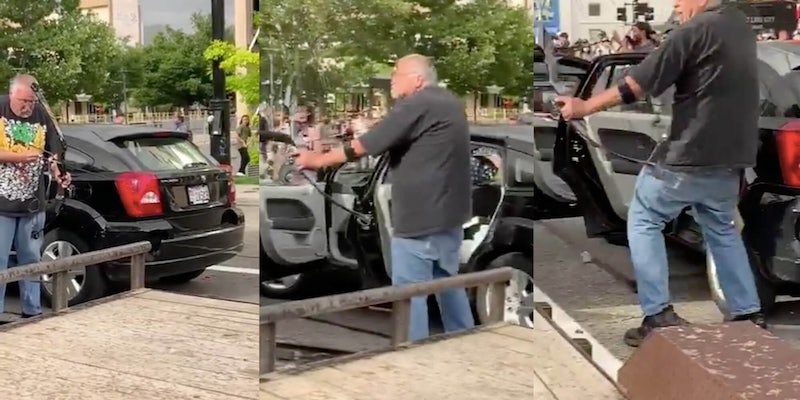 He then lied to a local news station about what transpired.

As tensions rise across the country this weekend, Americans are relying more and more on social media to see what’s really happening in clashes between protesters, police, and the people who just show up to escalate and instigate violence.

In one video shared to Twitter, a white man with a hunting bow steps out of his vehicle at the protest in Salt Lake City, Utah, and raises it as if to shoot at protesters walking by.

“Look at this! You call yourself an American?” asks the woman shooting the video.

“Yes! I’m American! All lives matter!” he yells back, pulling his bow up to aim.

It’s unclear whether the instigator gets a shot off before being tackled and swarmed by protesters who disarm him.

“He got out of his car, yelled ‘that’s it,’ and shot into the crowd before being tackled,” the woman who recorded him tweeted.

Eventually, the protesters flipped his vehicle and set it on fire.

According to KSTU, the local Fox station, the man identified himself as Brandon McCormick and claimed he pulled over to “help” police officers.

“Well, first I got beat up when I yelled ‘All Lives Matter.’ Then I pulled out weapons and I got beat up some more.” he said, face bloodied and bruised.

McCormick proceeded to complain that he lost everything in his car, all because he had been following protesters trying to convince them that not all cops are bad.

Eventually, when the video of McCormick aiming a bow and arrow at protesters began circulating across social media, KSTU was forced to clarify that “it looked very different from what we saw.”

“This is a very different story from what we were told,” the anchor admitted.

KSL.com reports that McCormick was taken into custody, but it’s unclear if this was just police pulling the man away from protesters initially or if this took place after the misleading interview he gave to KSTU. It also reports that he had a large knife on his person at the time.

The Salt Lake City protests are just the tip of the iceberg of protests happening all across the country in response to George Floyd’s death at the hands of police officer Derek Chauvin in Minneapolis, Minnesota.

In other cities, police have been caught on video attacking protesters and attacking the press, often seemingly unprovoked.

Minneapolis is currently investigating the possibility of outside agitators, such as McCormick, infiltrating the otherwise peaceful protests in a coordinated effort to incite violence and cause property damage.