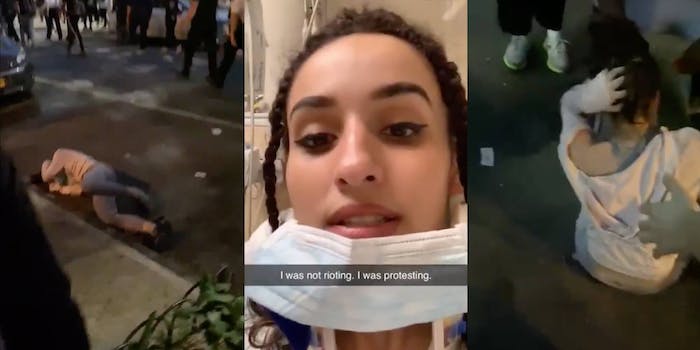 Video: Protester suffers seizure after being violently shoved to ground by officer

In the video, he calls her a 'stupid f*cking bitch,' seemingly unprovoked. The officer is now under investigation.

A young woman in New York suffered a violent seizure and was rushed to a hospital in Brooklyn after being shoved to the ground by a police officer as she protested the death of George Floyd, a Black man who was killed Monday in Minneapolis police custody.

Dounya Zayer, who’s tweeted updates from her time in the hospital, says she was “in no way” aggressive toward the officer.

Video of the incident was first shared online by Newsweek reporter Jason Lemon.

“NYPD officer just called a female protester a ‘stupid fucking bitch’ and threw her to the ground,” he wrote.

In the video, Zayer is flung to the ground, lies there for several seconds, and clutches her head. Other protesters help her and attempt to get the officer’s badge number.

After confirming that she’s the woman in the video in question, Zayer explained what happened.

“This was me, and I want to make one thing clear to all the people that are commenting lies below this video,” she wrote. “I did NOT spit in this officer’s face. I was wearing a face mask. He told me to get out of the street and then immediately threw me out of the way.”

The New York Police Department confirmed to NBC that the officer is under investigation.

From the hospital, Zayer says she “was not rioting. I was protesting.”

“I did not even get in his physical space. He was moving in my direction, told me to move, and because I didn’t move out of his way in time, he threw me out of the way,” she says. “He was walking to me; I was standing in place.

“If you really want to compare me standing in the middle of the street to the officer that killed George Floyd … it’s not comparable,” she adds. “I was protesting for a reason and the officers who were at this protest should back down.”