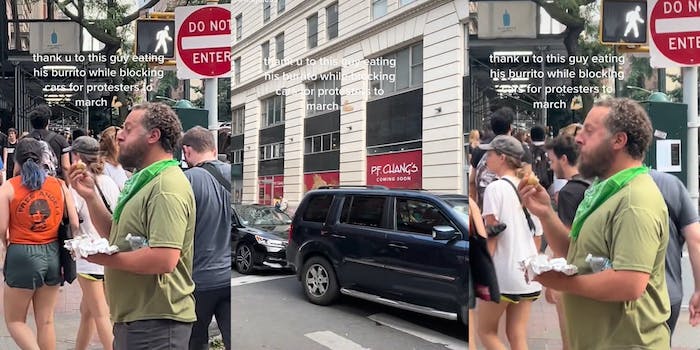 ‘Man has his priorities in order’: Man stops traffic to eat burrito during Roe v. Wade protest so that people can march

'Not all heroes wear capes.'

TikTokers are thanking a man who was filmed stopping traffic during a reproductive rights protest while eating a burrito.

Reproductive rights protests erupted throughout the U.S. after it was announced on Friday the Supreme Court overturned the landmark Roe v. Wade ruling that gave women across the nation the right to an abortion.

In a video posted earlier in the week, TikToker Giulia (@itsguless) thanked a man who was filmed eating a burrito in the middle of the street at a protest in New York. Giulia credited the man with “blocking cars for protesters to march.”

The video has over 6.2 million views.

“What a pro,” the musician and producer commented.

“Man has his priorities in order,” the top comment on the video reads.

While some scrutinized the man for blocking traffic, others shut the critics down.

“Well that’s just not fair to the cars waiting,” one user, Henry, said, to which Giulia replied: “It’s not fair to treat humans like incubators Henry!!!”

Another viewer claimed the man in the video is her stepfather.

“Omg show him and tell him he’s appreciated!!” Giulia responded to the TikToker, Caily (@callhercaily).

The Daily Dot reached out to both Giulia and Caily via TikTok comment.