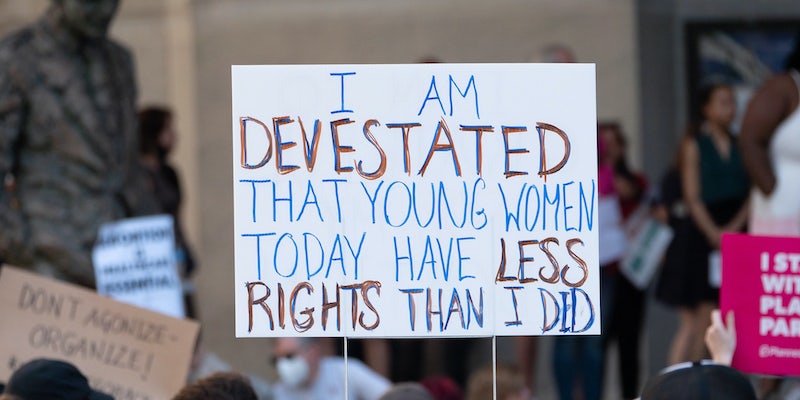 There are inherent risks involved.

However, some people are warning against accepting these offers, worrying about the intention of those making them.

In a viral thread, user @blackpnwlady advised users not to trust people who publicly state their homes can be used for abortion travel.

“If you’re in a state that just banned abortion, DO NOT reach out to these people who are offering to let folks stay at their place if they need an abortion,” she wrote.

In the thread, which has over 30,000 retweets and 100,000 likes, the user said that while some people are attempting to help, those offering their homes or cars—like in viral TikToks—are probably not affiliated with abortion funds and aren’t thinking through the risks.

“These people have just gone on social media and publicly announced they are a safe haven for abortion seekers,” she wrote. “Anti-abortion people are now watching them. Law enforcement will learn their names.”

Abortion activists argue that “geofence” warrants could be applied to the residences of people who have expressed their willingness to house out-of-state travelers seeking abortions, possibly incriminating both parties.

“If abortion is made illegal, it is inevitable that prosecutors will use geofence orders and Google’s location data to hunt down, prosecute, and jail people for obtaining critical abortion care,” Fight For the Future, a digital advocacy group, said in a statement following the letter sent to Google.

“These individuals are putting their hero complex before your safety,” @blackpnwlady wrote in her thread. “If they wanted to do this work, they would have gone to established networks and done the training, done the work, and learn how to do this safely. Do not trust them.”

She also pointed out the anonymity of Twitter, which might allow people to “pretend to help you for the purpose of trying to catch you” by preying on the desperate nature of abortion seekers looking to travel to another state.

While many users agreed with the thread and replied that it changed their view on people offering up their homes, other Twitter users were more than willing to take a stranger at their word, believing in the general benevolence of people.

“I see your point but this is harsh,” said another. “There are a lot of well-meaning people wanting to help and this is one way. This seems very insulting to an awful lot of people. At the same time I agree you do not know who you can trust and those people are also putting their lives in danger.”