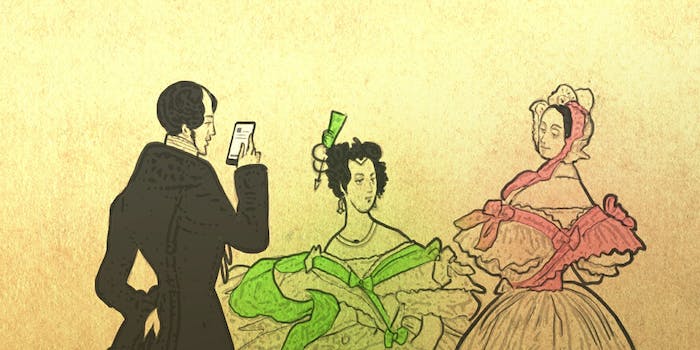 Should you make your relationship status public on social media?

In the first edition of 'HTTP's and Q's,' we explore this murky topic.

Welcome to HTTP’s and Q’s, where we’ll be answering your most pressing Internet etiquette questions—Internet-iquette, if you will. Have a Web-based moral dilemma that plagues you each time you unlock your home screen? Send your problem to [email protected], and it might be answered in the future.

In the meantime, remember to type, click, and swipe with caution.

Question: When I look at someone’s Facebook, should I be able to tell from their information, photos and status updates if they’re currently in a relationship? And should a person’s relationship status be evident on all of their social media platforms?

Once the idea of “swiping right” became the potential start of a new relationship, all the old rules of dating effectively went out the Chrome window.

It’s the wild, wild west out there, and we’re armed with little more than our eyes, ears, and the vague hope that cute guy isn’t planning to harvest and sell our internal organs on the Dark Net. That’s why most of us look for whatever evidence exists about potential paramours by Googling their social media profiles. (Oh, don’t act like you’ve never done it.)

It’s a fair assumption that someone is single if you meet them via a dating app (although that’s not always true). Things get much more murky, however, when you try to size up a person’s relationship status based on a Facebook, Twitter, or Instagram account.

“Is that girl in his photo a girl friend or girlfriend? She’s appeared in three photos in the past five weeks,” you maniacally think to yourself. “Is that when they started dating or is that when they DTR’d (defined the relationship), or is she a new friend?”

It’s crazy-making, for sure, but not irrational in this day and age when our selves are very much defined by the online persona we present. These seemingly inane thoughts have haunted many of us at some point, but there’s a simple solution:

Everyone should just make their relationship statuses obvious.

Laurie Davis, the founder of online dating advice site eFlirt, advises online daters about how to best approach their strategy. She’s seen it all when it comes to cyber questions and hiccups. That’s why she’s of the mind that the less ambiguity, the better. “A general majority approach social media for personal reasons, and your love life is part of your personal life,” she told the Daily Dot in a recent phone chat.

It isn’t necessary to broadcast your entire relationship on your various accounts, she clarified, but it is a courtesy to your significant other and people who might be interested in you to make your status known.

“So often on platforms like Facebook, for example, people may not choose a relationship status,” she said. “I think it’s best to choose one so it’s clear…If you’re not selecting something, it’s important for you to post photos, post updates about your spouse. Make it clear to your followers. We all have followers that we don’t 100 percent know IRL [in real life].”

Some people aren’t comfortable with even disclosing that relatively minor amount of their personal life; we have heard many friends in relationships say “it’s no one’s business whether or not I’m single.” The problem with that argument is that it’s kind of their business.

“It is other people’s business because other people might be hoping that you’re single,” Davis said. “There are so many gray lines online when it comes to relationships, and what other people’s intentions are, you’ll never know until they reveal it you. You don’t have to let the intimate details out or share photos. But you at least should check the appropriate box.”

You definitely don’t want that big reveal to come after you’ve put on your sassiest outfit and triple-checked your hair to make sure it falls just so… only to find that you’re actually just at drinks for professional purposes. Or, worse, he or she is attracted to you and wanted to meet up because they like the attention and wanted to scope out what’s out there without leaving the comfy confines of a committed relationship. Window shopping sucks for the person behind the window. Don’t be that guy (or girl).

If a person publicly interacts with you via Twitter @ replies and favs, or Facebook and Instagram likes or comments, there’s a possibility that they’re flirting with you. But once someone slides into your private inbox (pun intended), that is unequivocal flirting. Let’s just clear this up, once and for all: DM plus initiation of get-together equals date, unless explicitly otherwise stated.

The only instance where it’s OK to keep your personal life under lock and key is if you only use social media for professional purposes. Are you an avid LinkedIn user who loves to #network and talk about #brands? Do you use Twitter just to contact potential sources or get your news? Then it’s OK to keep your details under wraps.

The final word: When it comes to social media and relationship status, do us all a favor, and leave a small trail of crumbs that helps lead a potential suitor to the right conclusion.