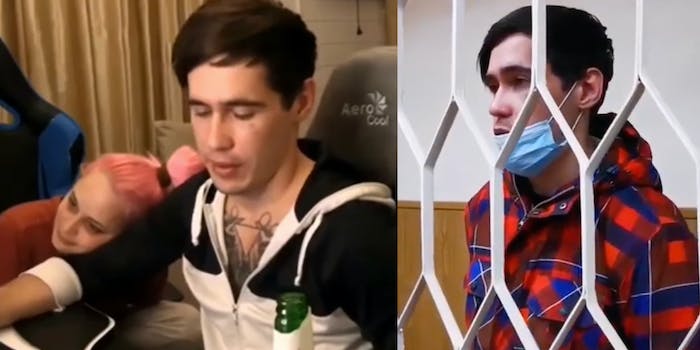 Reeflay reportedly forced Valentina Grigoryeva to stand on a balcony in below-freezing weather while she was only in her underwear.

Reeflay, the popular Russian YouTuber who live-streamed his girlfriend’s death after allegedly abusing her at the behest of viewers, was sentenced to six years in prison on Tuesday, according to Moscow Times.

It was widely reported that in December of 2020, the 30-year-old, whose real name is Stanislav Reshetnyak, forced 28-year-old Valentina Grigoryeva to stand on a balcony in below-freezing weather while she was only in her underwear. Viewers reportedly paid Reeflay to verbally and physically abuse Grigoryeva on stream. During the stream, he called her a “prostitute” and “smelly,” according to the Sun.

When he later went to bring her back inside, he found Grigoryeva seemingly dead. “Guys… no pulse… She’s pale. She is not breathing,” he reportedly told the thousands of viewers who were watching the broadcast. Reeflay continued the stream as paramedics pronounced Grigoryeva dead at the scene.

While it was initially reported that she froze to death, it was later discovered that Grigoryeva’s died from injuries sustained to her head, according to the Moscow Times. She, according to the medical examination, sustained multiple bruises on her body, a traumatic brain injury, and a cerebral hemorrhage, Moscow Times reported.

A judge in Moscow on Tuesday reportedly found Reeflay guilty of involuntary manslaughter in Grigoryeva’s death, and he was sentenced to six years at a “maximum-security prison colony.”

Grigoryeva’s death brought national attention to the concept of trash streaming—a type of stream popular in Russia that entails people doing whatever is asked of them in exchange for money—and prompted Russian lawmakers to advocate for legislation that would help prevent such streams from taking place.

“A criminal case has just been opened because a girl died as a result of a stream,” Russian Senator Alexey Pushkov reportedly told fellow lawmakers at the time of Grigoryeva’s death. “We must introduce such amendments to the legislation that will prohibit trash streams.”