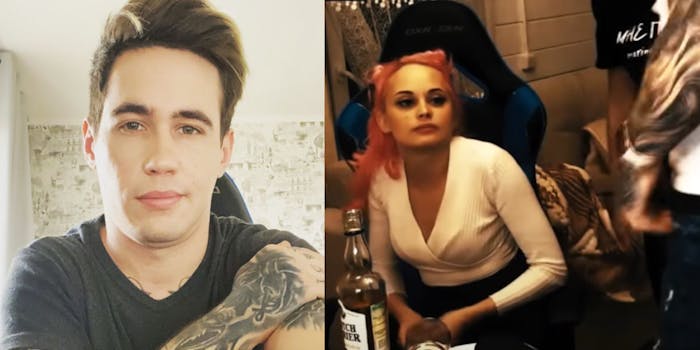 One viewer paid him $1,000 so that they could watch Reeflay torture her.

A Russian YouTuber was reportedly arrested after he live-streamed himself torturing his pregnant girlfriend to death. A viewer reportedly paid him $1,000 to inflict the torture.

The 28-year-old woman, identified as Valentina Grigoryeva by the Sun, died of hypothermia after YouTuber Stas Reeflay allegedly forced her on a balcony in sub-zero weather in only her underwear.

What happened to Valentina Grigoryeva?

The killing took place at a house the YouTuber, whose real name is Stanislav Reshetnikov, was renting in the village of Ivanovka, near Moscow. Reshetnikov live-streamed the killing to his tens of thousands of subscribers, the Sun reported on Thursday.

In the stream, which was captured and reposted to various Russian YouTube channels, Reshetnikov can be seen dragging Grigoryeva’s limp, half-naked body inside his room before he places her on the couch.

According to a translated transcript published by the Sun, he says: “Valya, are you alive? My bunny, what’s up with you?”

“Damn, you look like you are dead,” he later says, expressing that he is “worried.”

“Guys… No pulse… She’s pale. She is not breathing,” he tells viewers, realizing she is dead.

In one video featuring the aftermath of the incident, he cries loudly—at times in front of the camera and at times by her body. He also bangs the couch arm a few times, seemingly in frustration.

Why did YouTuber Stas Reeflay allegedly kill his girlfriend?

According to the Sun, Reshetnikov was “egged on” by his audience. One unidentified viewer reportedly paid Reshetnikov $1,000 so that they could watch him torture Grigoryeva.

According to Heavy, some speculate that he forced her onto the balcony after they had a fight.

An investigation is underway.

The broadcast went on for two hours after she died.

Update 6:23pm CT, Dec. 3: When reached for comment, a YouTube spokesperson told the Daily Dot that while the “original live stream did not take place on YouTube,” it removed reuploads of the stream and terminated Reshetnikov’s account.

“We’re shocked to learn of this tragic incident. This kind of graphic content is not acceptable on YouTube,” the spokesperson said.

It remains unclear which platform the incident was streamed on.