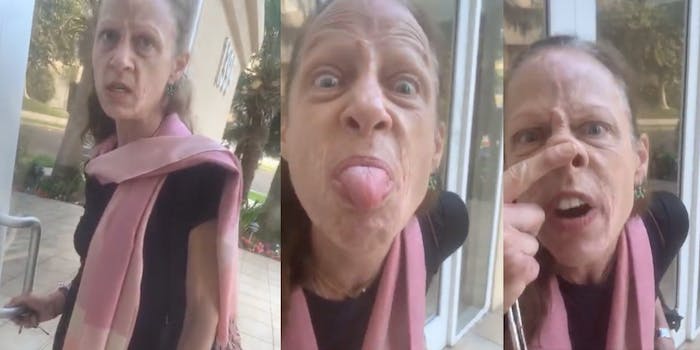 'Don’t deliver anything here. We don’t want your delivery here.'

A Black man was blocked and harassed by a white woman while he was making a Postmates delivery in California.

Jordan Mykel Gipson told the Daily Dot the incident took place on Tuesday. He was trying to complete a delivery in Westwood when he was stopped by the woman. He feared she was going to call the police on him.

Gipson posted two videos of the incident to Instagram. The maskless woman is seen interrogating Gipson about his mask. Later on, she is seen standing by a door, blocking Gipson.

“So you’re not gonna let me in to deliver this food?” he asks.

He then presses the buzzer to be let in by the Postmates customer, and the woman says, “Yeah. We don’t like that shit.”

“No, don’t … don’t point that shit at me,” she says. It’s unclear what she is talking about; he is only holding his phone and the delivery bag.

“I have food I have to deliver to somebody, ma’am,” he says.

“Don’t deliver anything here,” she responds. “We don’t want your delivery here.”

Someone answers the buzzer, and Gipson says, “Excuse me, Paul, there’s a woman here at the door.”

The woman, who is not wearing a mask, comes close to both Gipson and the buzzer, and says, “Hello. Who is this? Who is this?”

“Can you back away from here?” Gipson says.

“This is my building; I’m not gonna back away from here,” she says before speaking into the buzzer again.

As Gipson tries to say he’s just there to make a delivery, she cuts him off again.

“Who is this? Who is on the speaker? Who is speaking? I live in this building,” she says.

The person on the other end of the buzzer isn’t fully audible but can be heard saying they’re expecting a Postmates delivery.

“Where do you live, sir?” the woman asks. “I’m not letting this man in. Can I bring this food to you?

“I’m at the entrance to your building,” Gipson says, talking into the buzzer.

“Who are you? Who is this?” the Postmates customer asks the woman.

“I live here,” she responds. “Asshole! And I pay rent here.”

“So? I do too. So, what’re you asking?” the customer responds.

“I’m asking you to get out of my building because you don’t live here,” the woman says the customer.

“I’m a Black man, and I’m trying to deliver,” Gipson says, while the woman continuously interrupts him. “I’m working for my mom. Her name is Anna; my name is Jordan.”

Gipson told the Daily Dot that his mother is the delivery person registered with Postmates, but he was helping her out as she is recovering from an ankle injury. His mother, Anna, was in the car at the time.

“I am delivering the food,” Gipson says again.

The woman continues to guard the door and says he doesn’t have a car and “didn’t get out of a Lyft” or Uber. Gipson pans the camera over to a white car to show that it’s his.

The woman refuses to believe him and says, “He’s a Black man walking around who has a [inaudible] to get into any building he wants to.”

“Yeah dude, you got codes dude, you don’t got a brain,” she says to him in a mocking tone. “Generation Z or X, whatever you are.”

Gipson told the Daily Dot he worried that the woman wasn’t wearing a mask and that she called coronavirus a “hoax.”

She then moves out of the camera’s view.

“Can you get away from me?” Gipson asks.

The woman continues to harass Gipson before the person on the other end of the buzzer offers to come down to pick up the order.

She then says, “Buzz 110—they took my name down from the directory.”

The woman then gets closer to Gipson, sticking her tongue out, spitting. She also makes a piggy face by pushing her nostrils back.

“And, I don’t like your fucking pig fuck phone, either,” she says.

She then points to another man passing by and says he is a neighbor who she sees “him all the time.”

Gipson reminds her that he doesn’t live here.

Eventually, the customer comes down and takes the order from him.

“She’s an old white lady, and I’m a young Black man,” he told the Daily Dot, adding that’s why he wanted to document the incident by recording.

Gipson said he didn’t expect the video to go viral.

“I’m tired of working three jobs and having to deal with this shit,” he said. “A lot of what went down in the last couple of days, it reflects what most people with this kind of jobs—mainly people of color—have to deal with, have to suck it up.”

He said he didn’t want to file a complaint with Postmates because it wasn’t the customer who was harassing him, and the delivery service’s name shouldn’t be dragged into the incident.

A GoFundMe for Gipson has since been launched.