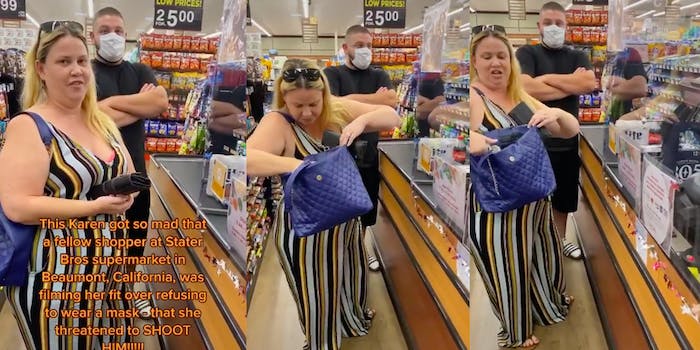 He confronted her about not wearing a mask.

A man recorded and confronted a woman who refused to wear a face mask in a California grocery store. In response, she threatened to shoot him.

Perez Hilton highlighted the video of the incident to TikTok on Thursday, though it’s unclear when the incident occurred. Text on the video alleges it happened at a Stater Bros in Beaumont.

“The state says you have to wear a mask,” the man recording says.

The woman attempts to shoo him away, snarkily saying, “Bye.”

He then makes multiple requests that the woman put on a mask, but she ignores him.

“I have a mask, but I have an anxiety attack in two minutes,” she tells the man before saying that she has a doctor’s note for her medical condition.

“You are not recording me; you will get shot outside of this parking lot,” she says upon noticing that he is recording her.

She begins searching in her bag after threatening him. He tells her that he will call the police.

“Go ahead,” she responds to him.

Then, she finally pulls a mask out of her bag, saying, “I’ll put my mask on.”

One TikToker responded to the video by saying that they “have ONLY one working nostril, the other not SO good neither, chronic asthma, ANXIETY AND PTSD” but isn’t complaining about having to wear a face mask.

Neither the man filming nor the woman in the video has yet to be identified.