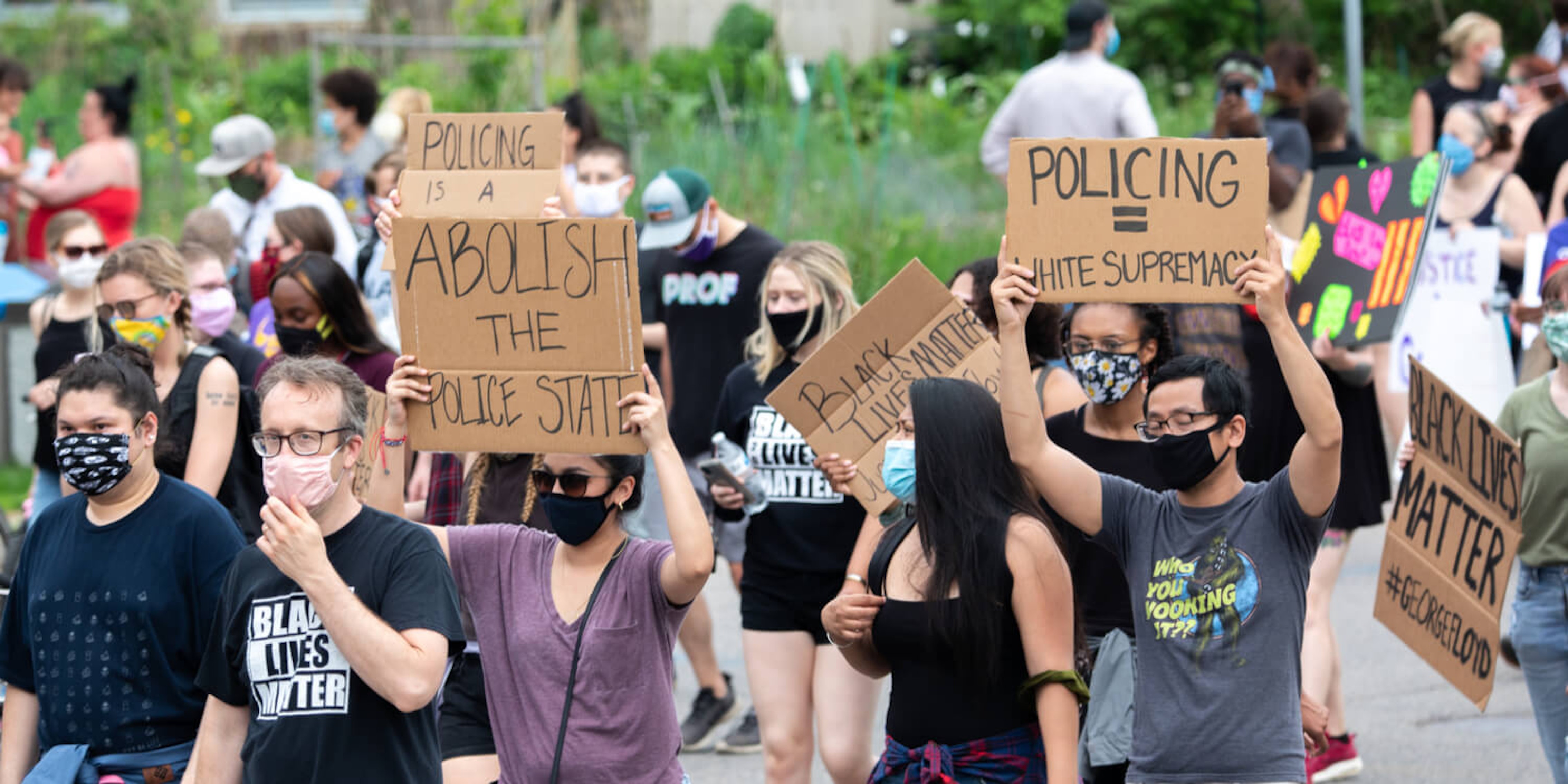 The best way to fight police brutality is by staying home

For activists, there is so much to do online.

The video of George Floyd begging Minneapolis police for his life is brutal. It shows him repeatedly saying “I can’t breathe” as a white police officer puts pressure on his neck. Floyd died shortly after, in police custody, because of the officer’s callous disregard. His death sparked protests across the nation, with hundreds taking to the streets in his hometown. However cathartic and important it is to be seen and heard IRL, we must prioritize logging on and organizing online.

Floyd’s death is an outrage. But street protests amid the coronavirus pandemic are a dangerous exercise—especially for people of color, whose communities are being ravished by the virus. As a Black woman and anti-racism activist who spent years attending rallies, I implore people to stay home and instead focus their activism efforts in the online world with organized, targeted action. Recent data revealed that Black people are dying from the disease at almost three times as frequently as white people. We cannot lose more lives in the fight against the virus in our effort to defend Black lives.

When protesters began to gather at the site of Floyd’s death on Tuesday to fight for justice, the city was already waging war against the coronavirus, which recently gripped the city’s state. According to state officials, ICU capacity in the Twin Cities was 87% as of Tuesday, and the city has the fourth-highest positivity rate of any city in the country. The city’s officials are now considering using stadiums in the event there is an ICU bed shortage.

As the protests continue to grow, the likelihood that will happen is increasing. Images of protesters, some without masks, crammed together and not adhering to social-distancing rules are dominating the media. They are a likely sign of more infections to come.

The coronavirus, however, is not the only threat protesters face. Stay-at-home orders implemented to stop the spread of COVID-19 may be used to justify a forceful response against protesters who are not practicing social distancing, many of whom will likely be people of color. Though white protesters have publicly protested and even stormed state capitol buildings in defiance of orders put in place to curb the virus’s spread, without very much police intervention, reports of police using aggressive force to enforce social distancing in Black and brown communities continue to crop up. Meanwhile, police used pepper spray and tear gas at the Minneapolis rally for Floyd.

On Twitter, users have highlighted the discrepancies between the treatment of white protesters and those with people of color at the forefront.

The true power of hashtag activism

Leveraging tech in the time of COVID-19 may very well be the most effective way to stand against racism. And doing so allows activists to follow in the tradition of the Black freedom fighters who came before them.

According to New Scientist, W.E.B Dubois used infographics, charts, graphs, and maps in order to fight racism. Later activists used bulletin board systems, file-sharing, and CD-ROMs to connect. Though some try to downplay the significance of “hashtag activism” and “cancel culture,” rapid-fire tweets and social media have started and shaped entire conversations about police brutality, appropriation, racism, and sexism. Attempts by the likes of Fox News pundits Chris Wallace and Brit Hume to recast social media justice efforts as “slactivism” or “an exercise of self-esteem” to help people feel better than themselves are dismissive and shortsighted, undermining the true power of the online world to address serious problems.

Black Lives Matter pushed against police brutality, which led to the implementation of body cameras among other feats. Me Too spurned an entire movement against sexual violence, which brought down Harvey Weinstein and other powerful men accused of violating women. Only days ago, Amy Cooper dominated newsfeeds and trended on Twitter after people came together online to identify her and figure out where she worked, prompting her employer to fire her. Swift online action can lead to swift justice, proving the effectiveness of digital activism.

For activists, there is so much to do online.

In the past, activists challenged systemic racism through meticulous organizing. Street protests were just one of the many tools employed. In the Civil Rights Era, public transportation boycotts directly challenged racist practices, massive voter registration advocacy brought Blacks to the polls, and sit-ins brought attention to the unfairness of segregations. These victories enabled Black people and other people of color to have access to spheres safeguarded for whites, including elite institutions and suburban neighborhoods.

Today, the gains won in that era are being threatened and organized online efforts may be the most lethal tool we have to fight back.

Every 10 years there is a census count, which is used by the government to decide everything from federal funding to political representation. Historically, the census count has always fallen short on accurately counting people from marginalized communities, but for this year’s 2020 count, the coronavirus will exacerbate that long-standing problem.

“This 2020 census in the absence of the coronavirus, was already going to be a big challenge,” Rob Santos, vice president and chief methodologist at the Urban Institute, told the Daily Dot. “Even before the virus, we predicted some significant undercounts of minority populations. Now, not only are you having difficulty in counting the historically easy-to-count people, but you are going to have an even harder time counting the people who typically are harder to reach like rural folks, African-Americans, Native Americans, and even children.”

Congress uses the census totals to determine the number of seats a state will have in the House of Representatives, and the data is used to draw district maps, which significantly impact election outcomes. So far, the coronavirus has created hurdles to an accurate census count, with many families delaying the completion of the important survey or not completing it at all. It has also made it difficult for the agency to go door-to-door and distribute information and forms. He believes both the economic and health impacts of the virus will lead to an undercount for this year’s census, which means people of color will be underrepresented in one of the most important data sets collected in the country for the next decade.

“In the midst of COVID, there are 40 million people out of work, many people of color,” Santos explained. “They have to worry about where their next meal is coming from or getting thrown out by their landlord. They are going to be worried about basic needs not whether or not their neighborhood gets funding in the next 10 years.”

Santos believes completing the census and urging others in communities of color to do so is a direct challenge to structural racism.

“At the core of the ability of the census to get a complete and fair count is the issue of structural racism and historical inequity in terms of resources to communities of color,” he said. “A tangible way to combat that would be to get communities of color to complete and submit the census. Doing that, you get proper representation for the community and can get more access to resources.”

The Census Bureau has taken the challenge head-on, vamping up its website for online participants and increasing data privacy protocols. In tandem with an online effort focused on organizing Black people, hurdles that potentially undermine a fair count can be overcome. (Complete the 2020 census here.)

The coronavirus is also posing a serious threat to American elections, with many fearing that the closure of public spaces like college campuses, churches, and other places where people gather may lead to decreased voter registration. So far, only 40 states allow people to register to vote online, and it is estimated that 28 million Americans are still required to register with a paper application. Some argue these access barriers will pose the biggest threat to Black people and other minorities, dampening voter participation in this crucial year and decreasing Black political power.

While much of the nation remains on lockdown to stop the spread of the coronavirus, now presents the opportune moment for Black activists to hunker down and continue to expand efforts to organize online. In the quest for justice for Floyd, the public must not forget that it’s fighting two unseen forces: the virus and systemic racism.

At this time, the best way to combat both is by staying at home, organizing online, and taking to the digital streets.