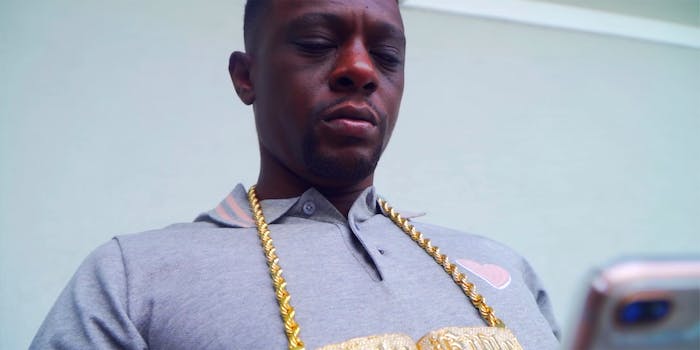 'Possibly the greatest failure of Black masculinity is failing to differentiate sexuality from sexual assault.'

Last week, rapper Boosie Badazz bragged about paying sex workers to perform sex acts on his son and nephews. The video stirred backlash and highlighted problematic, heteronormative views on sex and sexuality within the Black community.

He said he hired a “grown woman” to perform oral sex on the boys and that the same woman was also paid to provide services for him.

“That’s how it’s supposed to be,” he continued. “Hell yeah I got my fucking son dick sucked. You fucking right. Yes, a grown woman, grown, super grown, checked his ass out. Checked all my nephews out, super grown. Is she grown? She check me out.”

Per the rapper’s rant, his actions will help the boys and their journey to manhood.

“I know what the fuck she did to them, she checked me out, that bitch. I’m getting them prepared, man,” he said.

Emmie Saux, a social worker with the Louisiana Foundation Against Sexual Assault, told the Daily Dot they are “concerned for the safety” of the minors in Boosie’s care.

“I believe these allegations should be investigated in order to ensure the emotional and physical safety of his children and nephews moving forward,” Saux said. “Along with investigating the allegations, the state’s child protective agency, Department of Child and Family Services, can help connect the children to services that can provide support and information about healthy sexuality.”

On Twitter, users expressed outrage over the rapper’s confession, with some echoing the call for authorities to step in.

“Oh hell nah CPS needa look into that, n arrest all involved!” one user wrote. “If I paid a grown ass man to commit a sexual act on my 12 y/o daughter, I’d be going to jail!”

But some people, especially men, defended the rapper’s actions online. One of his supporters made a TikTok video urging others to leave the rapper be.

“I wish my daddy would’ve gotten me some head from a grown ass woman,” user @AEROxDINGO said in the video.”Leave this man alone, let him raise his kids.”

Some of Boosie’s biggest defenders also drew comparisons to Dwayne Wade’s decision to support his daughter Zendaya coming out to the public as transgender.

“How y’all mad at Boosie for what he sid wit son but was cool wit D Wade letting his son get a coochie?”

But the argument conflates gender with sexuality and sexual experiences. Still others asserted that Boosie’s actions weren’t wrong if the boys liked it.

“If they liked it i see nun wrong,” one user tweeted.

For Saux, there is no confusion about whether or not the rapper’s behavior is problematic: It is illegal sexual violence.

“Both Louisiana law and advocates’ understanding of sexual violence on this issue are clear,” Saux told the Daily Dot via email. “It is illegal and wrong for an adult to engage sexually with a child, and parents or relatives should never force children to participate in sexual acts or behaviors, including forcing children to watch pornography.”

Saux explained that the gendered belief that it’s OK for boys to engage in sexual activities with women is deeply rooted and carries serious consequences.

“A myth about boy’s sexuality perpetuated in our culture is that boys should want to have sex with adult women,” they said. “When an adult engages in sexual behavior with a child, this is abuse. These acts can have lasting effects on boys, including depression, anxiety, anger, lost productivity at school/work, health consequences, and difficulties in future relationships.”

One Twitter user highlighted the prevalence of that myth within the Black community, especially among men.

“I’m no expert, but from life experience and what vocabulary I do have, I definitely think there’s a divide, but it’s just not as simple at the root as Black men versus Black women,” Twitter user @tomorrowmanx told the Daily Dot via Twitter message. “It’s more so enablers, predators, and otherwise people that haven’t worked out their own traumas and issues around sex and gender against those of us that know better and strive to evolve.

“It’s tough to have these conversations, and I think the reason the needle doesn’t move ultimately comes down to the lack of nuance in the middle regarding how cishet Black people tend to raise Black boys, especially, and proliferate heteronormative culture within our community.”

He believes both men and women need to challenge their beliefs about sexuality and gender roles in order to better protect boys.

“Once we start there and shift the convo away from mere gender dynamics, and start to see the problem as heteronormative or patriarchal in nature, we can see how women also participate in the grooming of boys that leads to toxic manifestations of masculinity,” he continued. “Black men are not alone in their intolerance to femininity, tenderness, and softness in Black boys. Black men are not alone in their expectations that boys and men behave a very certain way.”

These expectations ultimately leave boys like Boosie’s son and nephews vulnerable to abuse and unable or unwilling to get help.

“One in 6 boys will be sexually abused before their 18th birthday,” Saux said. “That being said, boys and men are less likely to report sexual violence. There is already a lot of shame and stigma around the topic of sexual violence, and the barriers to reporting or accessing sexual assault services are even higher for boys and men.”