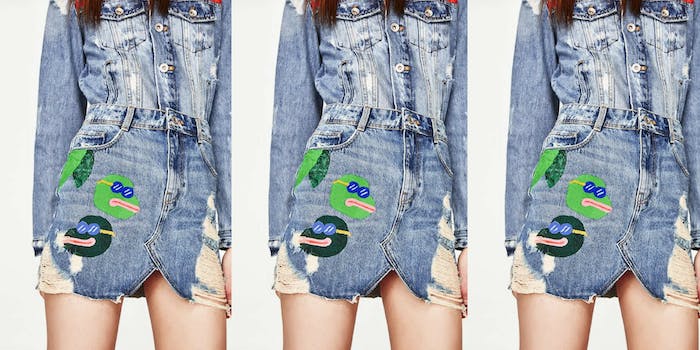 Clothing company Zara has pulled a denim skirt from their online shop after receiving criticism that the skirt’s design appears to depict Pepe the Frog, the alt-right-appropriated meme symbolizing hate and white supremacy.

According to the Guardian, the meme connection originally came from fashion and music writer Meagan Fredette, who tweeted about the discovery on Monday, April 17.

“My immediate thought was holy shit, they have no idea what they are doing here, do they?” Fredette told Dazed. “…They are trying to be edgy here, without caring about the very real implications of their design. Flirting with racial controversy is not a good business tactic.”

Perhaps @ZARA is challenging the alt-right to be inclusive of green and black "frogs". #inclusion #frogs #pepe #ZARA

oh gosh i didn't even realise this about pepe oops, hopefully zara was just as unaware b/c i love their clothes (love my morals more tho) 😓 https://t.co/DWWNjYZTsq

Other Twitter users saw Fredette’s Pepe comparison and raised her one for Old Man Jenkins, a character from SpongeBob SquarePants.

So Zara put a (allegedly) Pepe meme on a skirt and it's a hate symbol now but it actually looks like Old Man Jenkins to me pic.twitter.com/UUphmEMfkg

Girl this is Old Man Jenkins from Spongebob😂 pic.twitter.com/pBbx7curhQ

While another group of folks didn’t see that much of the resemblance between Pepe and the frogs on the Zara skirt at all.

People are freaking out because Zara put a frog image on their clothes that slightly resembles Pepe??? What is happening

No, it didn't. Barely resembles Pepe, also it's a meme, it means as much as a mustard stain on your top.

A spokesperson for Zara told the Guardian in a statement that the skirt has nothing to do with Pepe the Frog, nor the alt-right, despite Fredette’s connection:

“The skirt is part of the limited Oil-On-Denim collection which was created through collaborations with artists and is only available in selected markets… The designer of the skirt is Mario de Santiago, known online as Yimeisgreat. Mario explores social interactions through his work and in his own words: ‘The idea came from a wall painting I drew with friends four years ago’…There is absolutely no link to the suggested theme.”

Zara also confirmed with BuzzFeed News that the skirt has been pulled from sale in the United States.

Zara is familiar with pulling items after resounding backlash. In 2014, they dropped a children’s striped pajama shirt with a yellow “sheriff star” (sound familiar?) after people said the design resembled clothes worn by Holocaust victims. In 2007, they also released a handbag that appeared to be embroidered with green swastikas.

At least this time it was just Pepe, and not an actual animal sewn into the clothing.

Update 11:42am CT, April 20: Artist Mario de Santiago directed the Daily Dot’s questions to Zara, whose spokesperson, Jesús Echevarria Hernández, said in a statement: “As you can imagine I cannot speak for Mario. What I can say is that the Company has vehemently denied any link to the suggested meme.”

Echevarria Hernández repeated that the artist had been painting the frogs for four years, and pointed to an old video in which he was doing so.