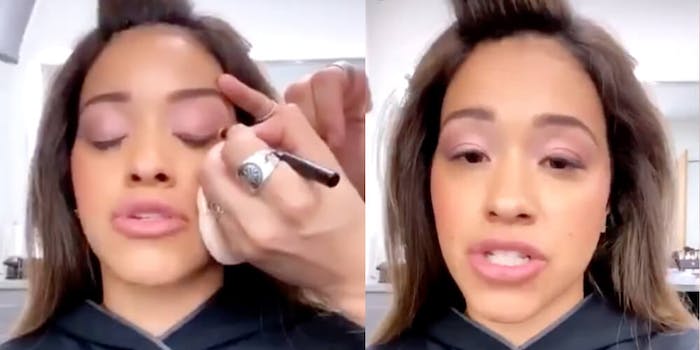 The 'Jane the Virgin' star has since deleted the story and apologized.

Actress Gina Rodriguez sang the N-word on her Instagram story, and social media users heard it loud and clear.

This is not the first time the Jane the Virgin star has come under fire for undermining the Black community. In January, Rodriguez was blasted for her “fake” tears after being called anti-Black in an interview on Sway’s Universe. Users recalled that moment after she posted a video of herself singing a verse from Fugees’ song “Ready or Not.”

“Gina Rodriguez went from crying about being called anti-black to ‘yeah I don’t respect black people what about it,'” Twitter user @honeyhyejoo wrote, along with Rodriguez’s Instagram story.

In the story, Rodriguez sings, “I can do what you do, easy. Believe me, fronting [N-words] give me heebie-jeebies,” before laughing.

Rodriguez deleted the story and promptly posted a follow-up story to apologize.

Rodriguez came under scrutiny over the years for lifting up the Latinx community at the expense of the Afro-Latinx and Black communities. One controversial comment arose when she discussed unequal pay to Net-a-Porter.

This ignited the anti-Black allegations against Rodriguez. When asked about it in a Sway interview, she was brought to tears–or fake tears, as deemed by many.

“We didn’t have many Latino shows and the Black community made me feel like I was seen.” Rodriguez said during the interview in January. “So to get anti-Black is to say I’m anti-family.”

Fast forward to Tuesday, people on Twitter are saying they do not need any further convincing on where Rodriguez stands with the Black community.

“Gina Rodriguez we finally got you bitch,” Twitter user @laylaskeating wrote, along with Kamala Harris as a cop memes.

gina rodriguez we finally got you bitch pic.twitter.com/f4QVDimqi6

you're gina rodriguez. you were just accused of anti-black racism earlier this year. you cried defending yourself.

Twitter did not accept Rodriguez’s apology months ago, and it does not seem like it will be opening its arms anytime soon.