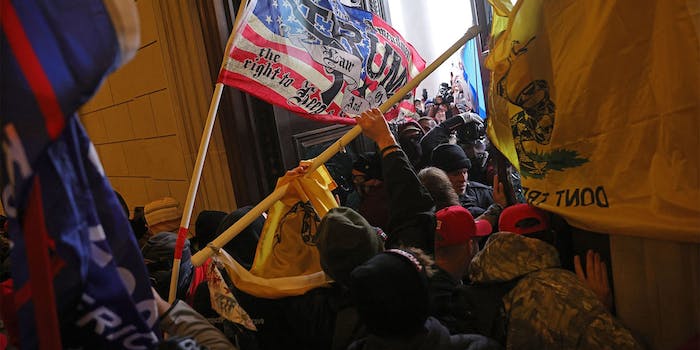 'They did exactly what they planned to do.'

A Washington, D.C., police officer says that the mob that raided the U.S. Capitol last week included “off duty police officers from all over the country” plus militia members, teachers, students, and people “from every walk of life.”

Officer Cortney Craft made the claim in a Facebook post on Thursday. Her Facebook profile was unavailable when the Daily Dot ran a search on Monday, but a screengrab of her post went viral on social media.

In the post, Craft said she had returned to Facebook to expose these officers. “I looked evil in it’s face for 14 hours,” she wrote, adding that claims made by some Trump supporters that members of “antifa” conducted the siege were false.

“They did exactly what they planned to do and they got the results that we all expected them to have,” she said of the insurrectionists. “They virtually went unpunished.”

She added that as someone on the frontlines, she witnessed many of the rioters brandishing their badges and ID cards. “They weren’t trying to hide who they are because they know nothing will happen to them,” she wrote.

D.C. officers have been criticized for allowing the mob through barricades and double standards in dealing with Black Lives Matter protesters versus white supremacist rioters.

“I did not see off duty cops flashing badges to gain access to the Capitol, but I saw plenty of guys in police tactical gear (which can be purchased by private citizens) around,” Blumenthal tweeted. “And I witnessed Capitol PD shaking hands and fraternizing with MAGA types, as they’ve done in the past.”

Craft’s words about police violence resonated with many who quoted her on this as they shared her post.

“If these people can storm the Capitol Building With No regard to Punishment You have to wonder how much they abuse their powers when they put on their uniforms,” she said in the post.

Officer Brian Sicknick died after being hit in the head with a fire extinguisher during the riot on Wednesday. Investigations have been launched into a New York Police Department officer and an Army officer for alleged participation in the siege.