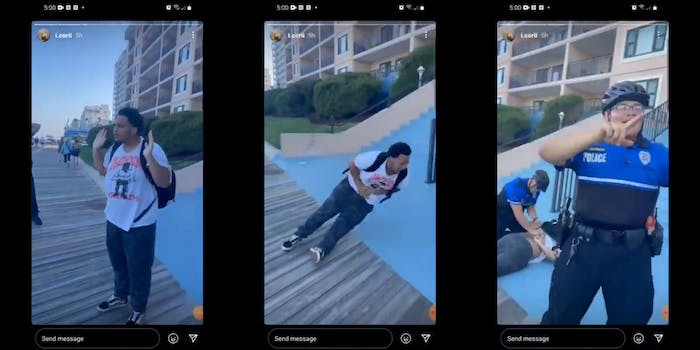 ‘All of this for one person’: Videos shows police tasing, hogtying teen, tackling others for allegedly vaping

The events left four teens arrested, though all were released.

A viral video shows police tasing a teenager after allegedly accusing him of vaping on the boardwalk in Ocean City, Maryland.

The incident has become another touchstone concerning police brutality and the necessity of “use of force,” specifically on Black people.

The footage begins with the young man surrounded by numerous Ocean City police officers; however, he puts his hands up.

An officer tells him to get down on the ground but then suddenly tases him as he reaches to take off his bookbag. He immediately goes down and appears unconscious after hitting the ground.

In another clip, he’s shown being seemingly hogtied, with his shoes taken off for an unknown reason.

The original poster wrote in an overlay: “All of this for one person. Because of a vape. This shit needs to be brought to everyone’s attention. Literally HOGTIED him, took his shoes off & took his pants while he was in there.”

In different video, reportedly taking place on the same day, an Ocean City police officer can be seen tackling another teen as a crowd gathers around them. Then, one officer repeatedly kneed the teen in his side as someone tells him to “stop resisting.”

Another video shows an additional scuffle on the boardwalk where one young man is tackled and another is tased.

The entire police interaction left four teens arrested, though all were released on their own recognizance, according to WBAL. Ocean City has had a no-smoking policy and town ordinance on the boardwalk since May 2015.

The Ocean City Police Department released a statement, promising a review but emphasizing their ability use force during arrests:

“We are aware of the social media videos circulating regarding this incident. Our officers are permitted to use force, per their training, to overcome exhibited resistance. All uses of force go through a detailed review process. The uses of force from these arrests will go through a multi-level examination by the Assistant Patrol Commander, the Division Commander, and then by the Office of Professional Standards.”