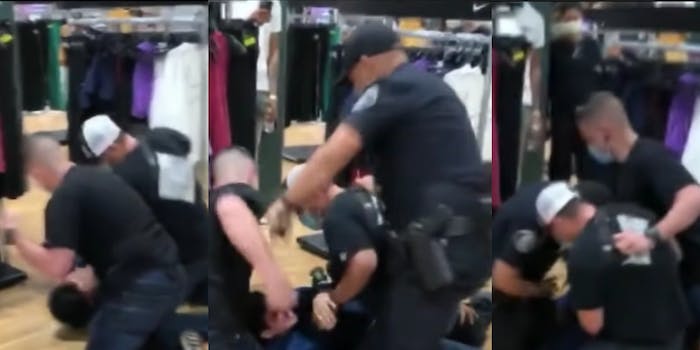 ‘All that for a shoplifter?’: Video footage shows police officer kicking downed teen in the face

'This is worse than a rough arrest. I’ve seen better tactics and discipline in a barroom brawl.'

Video footage shows a police officer kicking a young man in the face during an arrest at Glendale Galleria in Los Angeles.

The video, posted by CBS Los Angeles on YouTube, shows two men punching a teenager already on the ground at a Dick’s Sporting Goods in the Glendale area. The officer arrives and kicks the teen in the face before yelling “turn around on your face.”

The teen suffered injuries to both his eye and head from the officers’ force.

After watching the video, civil rights attorney Connie Rice told CBS Los Angeles it is likely that the officers’ behavior goes against the training they received related to apprehending a suspect.

“This is worse than a rough arrest. I’ve seen better tactics and discipline in a barroom brawl,” Rice said to the outlet.

The witness who recorded the video told KCAL9 that he believed mall security guards were attempting to arrest the teen for shoplifting. That’s when the uniformed officer arrived and kicked him.

One user commented under the YouTube video, “This does not look like they are attempting to arrest him, the video clearly shows them beating the crap out of the guy.”

One person questioned, “All that for a shoplifter?”

Another said, “I don’t see an arrest being made I see a violent gang assault.”

On Reddit, user u/N0CONTACT reposted the video, receiving over 800 upvotes. Viewers weren’t surprised at the footage.

“With all this investigating of police brutality it’s a wonder they get any brutality done,” one user commented dryly.

“I never got the concept of brutally hitting people and then ordering them not to protect themselves while continuing to beat them,” another commented.

The Glendale Police Department released a statement saying that an investigation into the incident, including all actions by the officers during the arrest process, was immediately initiated. The officers involved have been placed on administrative leave while the investigation is conducted.

A consecutive statement from the department revealed that the first two men in the video were plainclothes police officers. The teen accused of shoplifting was arrested for petty theft and resisting an officer by force.