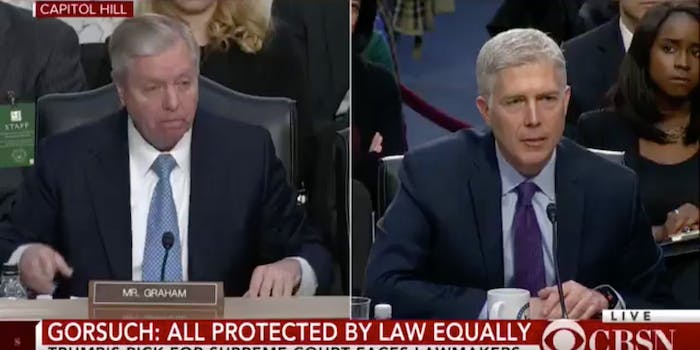 Neil Gorsuch would have ‘walked out’ if Trump asked him to overturn Roe v. Wade

President Donald Trump has been clear about his intentions to confirm an anti-abortion Supreme Court judge to replace the late Justice Antonin Scalia, but his own nomination may not necessarily fit the bill.

On Tuesday during his confirmation hearing, Supreme Court Justice nominee Neil Gorsuch told South Carolina Sen. Lindsey Graham that if Trump asked him to overturn Roe v. Wade, he would have “walked out the door.”

Graham had asked Gorsuch if he had met Trump personally. When Gorsuch replied he had during his interview, Graham asked if Trump asked him to overrule the abortion rights case, which Gorsuch denied.

“I would have walked out the door. It’s not what judges do,” Gorsuch said pointedly. “I don’t do it on that end of Pennsylvania Avenue, and they shouldn’t do it at this end either, respectfully.”

"Senator, I would've walked out the door," Gorsuch says when asked if Pres. Trump asked him to overrule Roe. v. Wade https://t.co/9cXeVrh2kY pic.twitter.com/K5iZfNJcr0

Earlier in the day, Iowa Sen. Chuck Grassley and California Sen. Dianne Feinstein pressed Gorsuch on the precedent of Roe v. Wade, considering the president’s promise for a judge who would overturn the ruling.

"I'm not going to take the bait during a live hearing to comment on that," @PressSec says when asked about Gorsuch's answer on Roe v. Wade. pic.twitter.com/9TFNc6CqEy

Despite Gorsuch’s seemingly neutral responses on the abortion rights case, Ilyse Hogue, president of NARAL Pro-Choice America, said in a statement on Tuesday that Gorsuch issued “non-answers” on the abortion questions, and that his record as an anti-abortion judge sets expectations for Gorsuch’s behavior if confirmed.

“Gorsuch’s record gives us all the clues we need to conclude that he will be the justice that Trump promised—one who will vote to overturn this popular precedent. The stakes are too high,” Hogue said. “A ‘no’ vote is not enough for the Americans who stand to lose so much if Judge Gorsuch makes it to the bench. Senate Democrats must filibuster this nominee.”