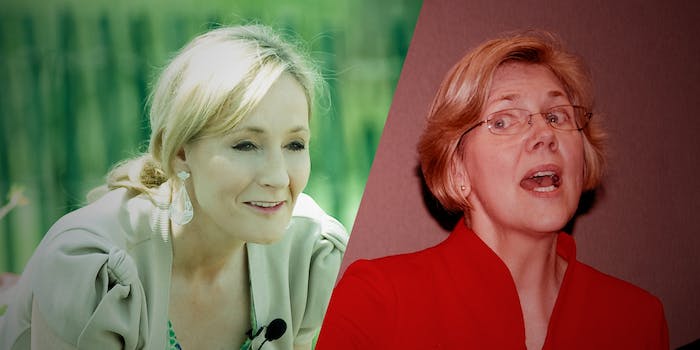 Native Americans are not happy with J.K. Rowling’s new story

They're pretty upset with Elizabeth Warren, too.

Two days ago, author J.K. Rowling released a new story, Ilvermorny School of Witchcraft and Wizardry, on her blog Pottermore. Controversy soon followed, as Rowling immediately faced backlash over the alleged misrepresentation of Native culture in a story that draws from real Colonial Massachusetts history.

People began tweeting about the misappropriation with the hashtag #MagicInNorthAmerica.

On Wednesday, Sen. Elizabeth Warren (D-Mass.) tweeted at author J.K. Rowling in support of Ilvermorny School of Witchcraft and Wizardry.

Looking for a Defense Against the Dark Arts prof, @jk_rowling? Where do I apply? Trump, Death Eaters – I got this! https://t.co/TDgHbeyApU

In 2012, Warren told NPR that she was of Native American heritage—which others have also questioned.

“I am very proud of my heritage,” Warren told NPR. “These are my family stories. This is what my brothers and I were told by my mom and my dad, my mamaw and my papaw. This is our lives. And I’m very proud of it.”

The Massachusetts senior senator—and Hillary Clinton‘s presumptive vice presidential nominee—has been challenged on her allegations of Cherokee heritage due to an absence of evidence, as former Sen. Scott Brown (R-Mass.) asked Warren to take a DNA test for proof. Warren also engaged in a series of  racial attacks by Donald Trump— calling her “goofy” and “Pocahontas,” which blatantly insults the Native culture.

Now people are calling Warren’s heritage into question again—especially since she is supporting a story that some Native Americans say misrepresents their culture in 17th-century North America.

Debbie Reese, a Native American enrolled at Nambe Pueblo in northern New Mexico, posted a series of tweets in response to Warren’s reaction to Rowling’s new story that was announced on Tuesday.

No surprise that Warren, who made false claims to Native identity, wants in on Rowling's new story. https://t.co/sOHy1XXM3J

Warren, who refuses to acknowledge the fact that she is not Native, probably adores the messed up Native content in Rowling's new story.

If Warren really cared about Native people, seems like she'd tell Rowling to hold up on this new story. I have no doubt that soon…

… we'll see stereotypical and inappropriate merchandise showing up online and at the Potter theme parks.

“If she doesn’t know what the story is about, and learns that Native people strongly object to it, will she revisit that tweet?” Reese told the Daily Dot. “Or will she, like Rowling, remain silent and ignore Native voices?”

Make up your mind. pic.twitter.com/IVbsiGCuxy

“The betrayal feels even greater because readers follow her on social media, and they know she sticks up for those who are marginalized,” said Reese, in regards to the story’s Native American appropriation. “Instead of sticking up for us, she’s ignoring us and doing this tremendous harm.”

Rowling’s publicist Rebecca Salt said that her client “isn’t commenting on this issue.” Warren has yet to respond to the Daily Dot’s request for comment.