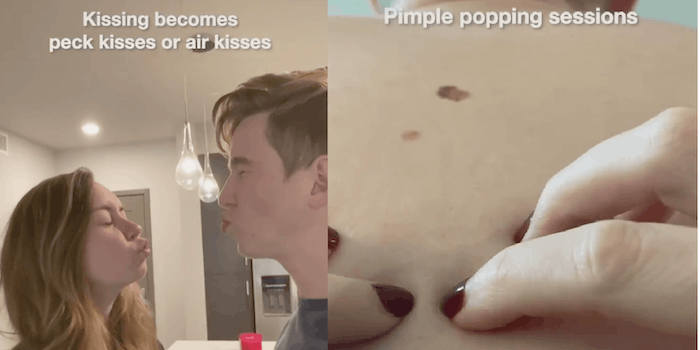 A melanoma survivor saw something familiar.

TikTok content creator Alex Griswold says a fellow user on the platform may have saved his life. After sharing a video about his marriage, Griswold learned his mole could potentially lead to cancer.

Griswold posted the clip in December, according to ABC News. He has over 497 followers on the platform.

The video, titled “Here’s what it’s like being married,” shares the raw truths of married life, like “complimenting each other’s farts” and having a “sleepover” with your best friend every day. During one example, “backscratching always turns into pimple popping sessions,” the camera shows Griswold’s partner squeezing two moles on his back.

At first glance, it looks like an ordinary mole. But two of his followers expressed concern.

Lizzie Wells, a melanoma survivor from California, immediately spotted something that she herself had beat, according to WSB-TV.

“I immediately paused the video and I was like, ‘I need to get a hold of this person.’ And so I commented on the video,” Wells, who is studying to be a doctor, told ABC News.

Griswold said he took her advice seriously when she DMed him on Instagram, and he realized she’s “actually a skin student.”

He then decided it was time to get the mole checked by a dermatologist. And sure enough, the doctors said after receiving test results, the “moderately atypical” mole was likely headed towards cancer. He got the mole removed.

“Now with the help of social media, we were actually able to save a life and so I was really, really happy,” Wells told WSB-TV.

If it wasn’t for the stranger’s intervention, Griswold told WSB-TV, he otherwise could “have gone years without going to the dermatologist.”

He rehashed the saga in another TikTok video, and he told the Daily Dot he’s thrilled to spread some good online.

“I think it’s awesome!” he said. “I want people to feel good about the world when they’re watching my videos and I think this experience has been a really cool example that social media can be really positive and life-changing.”