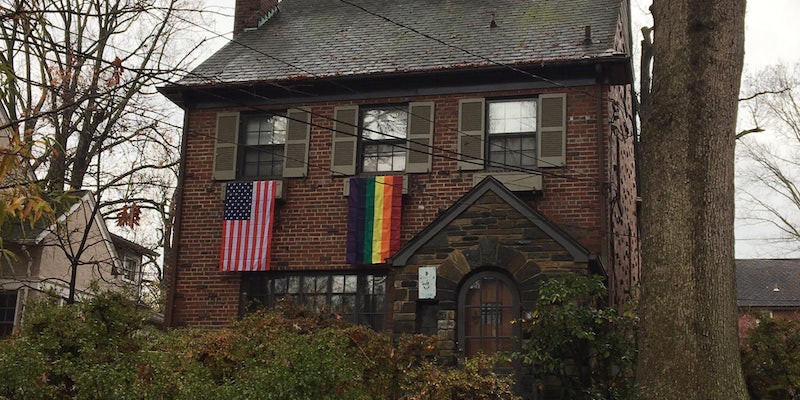 'I have no idea what he will think about [it], but I hope he will change his mind.'

Mike Pence’s new neighbors in Washington, D.C.’s Chevy Chase neighborhood are welcoming him to the community by decorating their homes with rainbow LGBTQ pride flags. The vice president-elect, who voted to keep marriage between one man and one woman, will live on NW Washington Street until he and Trump are sworn in on Jan. 20.

Residents on NW Washington Street where VP Elect Pence is renting a house are sending him a symbolic message. More residents may hang flags pic.twitter.com/fldYsMoP6i

D.C. Neighbors of VP-Elect @Mike_Pence Troll Him with Rainbow Flags for His Anti-Gay Views https://t.co/fDiEe7Cqrl pic.twitter.com/KswlMSvg3B

About half a dozen flags are waving outside of homes on his new block, with neighbors showing their support for the LGBTQ community and opposition of some of Pence’s beliefs and actions. In addition to voting against marriage equality, Pence notoriously supports funding for organizations that practice conversion therapy. He also voted against expansions of hate crime protections and believes employers should be able to discriminate against LGBTQ job candidates. Ilse Heintzen, one of Pence’s rainbow-flag-flying neighbors, told ABC affiliate WJLA that her decision to hang the flag was based on her disagreement with some of his ideology but was meant to be a respectful message. “I have no idea what he will think about [it], but I hope he will change his mind,” she said.