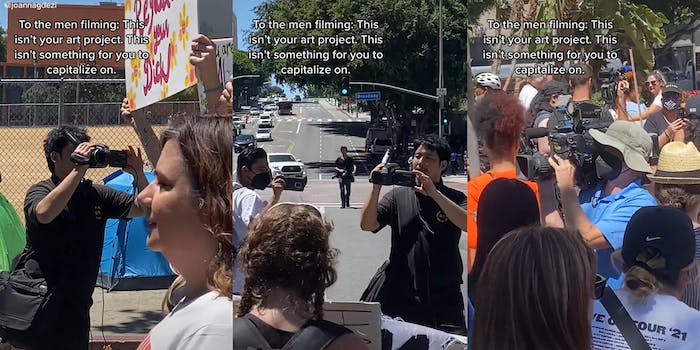 ‘This isn’t something for you to capitalize on’: Woman criticizes men who are filming pro-choice protests, sparking debate

'There’s a difference between documenting and exploiting!!!'

A woman posted a viral TikTok criticizing the men who filmed her and others at pro-choice protests, rather than marching with them. The video sparked a debate in the comments about media and men.

Joanna (@joannagdezi) posted the clip on Sunday. The clip shows her footage of the men who were filming protestors while she marched at the Los Angeles pro-choice protests this past weekend. The text overlay reads, “This isn’t your art project. This isn’t something for you to capitalize on.”

@joannagdezi Genuinely made me so uncomfortable. If youre gonna show up as a man show up and march. Were not a ZOO. #abortion #roevwade #supremecourt #losangeles #santamonica #protest #abortionprotest #prochoice ♬ original sound – salem

In the caption of her post, she wrote, “Genuinely made me so uncomfortable. If you’re gonna show up as a man show up and march. we’re not a ZOO.”

On Friday, protests have erupted throughout the country as the United States Supreme Court overturned Roe v. Wade, after almost 50 years in place. Roe held that reproductive freedom and abortion is a constitutional right. Almost immediately, abortion bans were triggered in 13 states with more expected to come, putting the health of people with uteruses and more at risk.

In the comments, Joanna acknowledged that many of these men are likely working for media companies. “And I know it’s their job but we don’t need to hear about this movement through a male perspective and male lens,” she wrote. “News companies should send women photographers etc… also it’s so uncomfortable????”

“They should at least wear press passes or ANYTHING to prove it’s not some random guy from YouTube trying to get clout…,” she added.

Some commenters agreed with Joanna.

“They’re there for a check and people rlly be defending that,” one user wrote.

“No literally men kept coming up to me and my friend asking for photos like no,” another commented..

“Yes!!! There’s a difference between documenting and exploiting!!!” a third wrote.

Others defended the men filming, claiming “they are capturing history.”

“I’m not a huge fan of being recorded by a man while out marching, but without documentation it’s easy for one side to say it never happened,” one viewer wrote.

“Lol, do you not want the message amplified?” another TikToker said.

“Also you’re at a protest? People are going to document. You’re making the problem people filming? Focus on the real issue at hand,” someone else commented.

One user argued that the men filming also put those marching at risk. “Not to mention how dangerous it is. They’re putting people at risk. Wear your protective gear friends,” they wrote.

Photos and videos at protests shared via social media can be used by police to identify participants and organizers, per Privacy International. Facial recognition software and gait recognition technology can be applied to this media to help police with the identification of protesters.