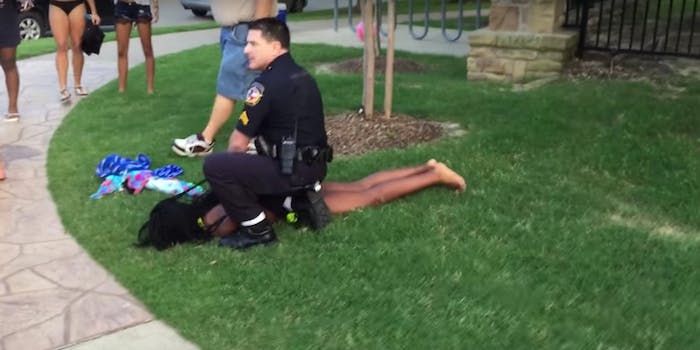 The girl, who was 15 at the time, says her constitutional rights were violated.

The teenage girl seen on video being repeatedly slammed to the ground by a police officer following a 2015 pool party in McKinney, Texas, has filed a federal lawsuit against the former police officer involved in the incident, the city, and the police department.

The lawsuit, filed in December by Dajerria Becton and her legal guardian, Shashona Becton, alleges that the ex-officer Eric Casebolt, who resigned from the department as a corporal following the June 15 altercation, violated Becton’s constitutional rights. Becton seeks $5 million in damages.

The suit claims Casebolt used excessive force and held Becton without probable cause. The suit further alleges that the McKinney Police Department and the city failed to properly train Casebolt, which allegedly resulted in the physical and mental harm the teenager suffered.

Becton was 15 years old at the time.

The original video of the incident—in which Casebolt is seen aggressively manhandling Becton, throwing her to the ground, and slamming her into the grass—went viral, and has since been viewed more than 12 million times. Casebolt is also seen briefly drawing his gun on the crowd of teens.

A grand jury decided not to indict Casebolt in June 2016. He left the force after being placed on administrative leave.

The incident reportedly began after white neighbors complained about the black attendees of the pool party and allegedly insulted them. Tatiana Rhodes, who organized the community pool party, alleges that two white women attacked her after one allegedly told her to “go back to your Section 8 home.”

In a statement sent to the Dallas News, the city of McKinney denied the allegations in the suit and vowed to “vigorously” defend itself in court.

“The City of McKinney denies the claims alleged against it and the McKinney Police Department, and as such, will vigorously defend the recently filed lawsuit,” the statement says. “McKinney prides itself in cultivating the highest standards of training and professionalism for our officers, and it strongly believes that its standards and training will withstand legal challenge.”