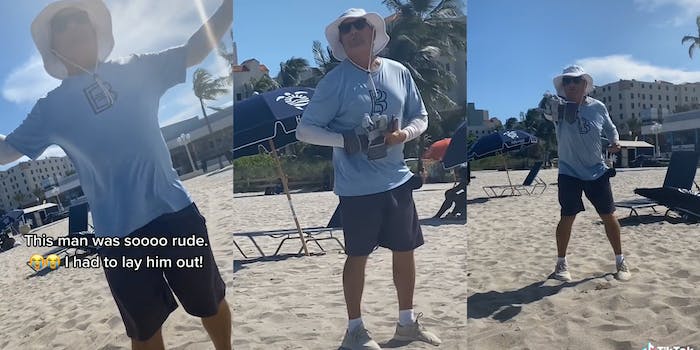 ‘He missed out on a nice tip’: Beach vendor accuses Black women of stealing chairs, threatens to call cops

'They love the cops.'

What was supposed to be a relaxing day at the beach turned into a stressful encounter for a couple of friends.

TikToker @its_thestar shared a video showing a confrontation she had with a man over some beach chairs. According to her comments, the man works for a company that lays out chairs at the beach and charges people a fee to rent them.

While @its_thestar and her friend came to the beach prepared to do just that, it took them a while to figure out who they were supposed to pay.

“They have a number on a sign to rent them. I called. Did my part. I found the guy I tried to pay,” she wrote. “He literally went crazy and started trying to pull my chair when I sat down to go in my purse and pay.”

It was after the employee allegedly yelled at her and tried to pull the chair out from under her until she’d paid in full that @its_thestar decided he wouldn’t be getting any of her money and started to record.

After some indistinct arguing back and forth, the man tells them that he’s going to call the police.

“You are stealing our property right now,” he says as @its_thestar and her friend tell him to go ahead and do that.

The video caption reads “they love the cops”—a clear reference to all the times white people have weaponized police against Black people for things that don’t seem to require police intervention at all.

The rise of social media has drawn more attention to this phenomenon in the past couple of years. The case of Amy Cooper, aka the “Central Park Karen” who called police on a Black man who was bird-watching in New York City, is probably the best known.

Other reports of white people calling the police on Black people for everything from writing outside their own homes to trying to shop at Victoria’s Secret have gone viral amid discussions about the intersection of racism, white victimhood, and policing.

In the case of the beach chairs video, it wasn’t immediately clear whether the man actually called the police or just threatened as much, but he did come back and drag the chair away from the area @its_thestar was in.

“He did too much for nothing,” she says. “I was loaded with money that day he missed out on a nice tip because it was HOT outside.”