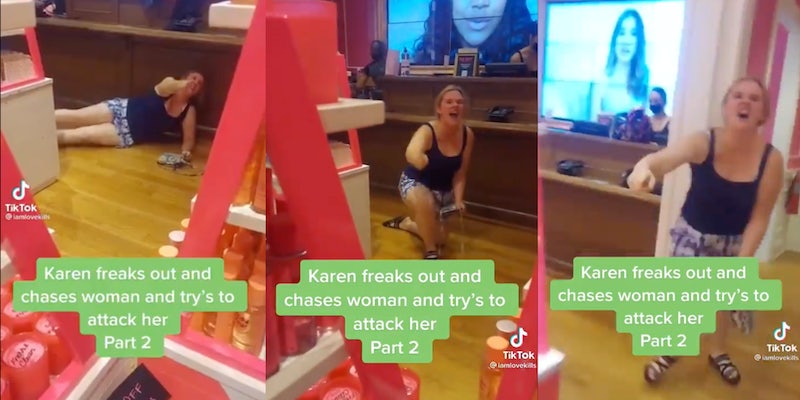 Video: Karen screams at Black woman to ‘get away from her’ while chasing her around Victoria’s Secret

The white woman also swung at her before sobbing on the ground and calling the police.

Police refused to escort a white woman out of a New Jersey mall after she took a swing at a Black customer and chased her around a Victoria’s Secret.

A viral video shows the majority of the encounter between Abigail Elphick, the white woman dubbed a Karen by the internet, and Ijeoma Ukenta. It is unclear what occurred before Ukenta began filming the viral encounter, but what she managed to capture has the internet up in arms.

It is clear that things were already tense before the camera started rolling. Just as the video starts, Karen is lunging toward Ukenta. She takes a swipe at her, which Ukenta appears to dodge, before realizing she is being recorded. That realization seemingly plays out over the woman’s face, beginning with shock and gradually working its way into concern, panic, and then sudden tears.

Karen buries her face in her hands when she realizes that her actions have been captured on tape, sinking down to crouch on the floor near the Victoria’s Secret checkout line. When Ukenta notes to someone off-screen that “she just tried to run and hit me,” Karen’s antics truly begin.

Wailing repeatedly that she didn’t attempt to strike anyone—despite there being multiple witnesses and a recording of her doing just that—Karen tries to shift the narrative in her favor. She claims that Ukenta was “threatening” her and demands to know why passersbys aren’t “defending” her.

When it becomes clear that she is not going to appear sympathetic in a video that was all but guaranteed to go viral, Karen begins to claim she is having a mental breakdown. She sobs and shrieks from her position on the floor, screaming at Ukenta to “stop recording me.”

After several minutes of crying and screaming at employees, customers, and Ukenta, the woman leans forward and lowers herself to the ground. Several viewers mocked her “fainting,” with one calling it the “FAKEST faint I have seen in my life.” Other’s compared the faint to Kindergarten school plays or a “drunk slomo fake faint.”

Karen remains prone on the ground for several minutes, using her purse as a pillow. Ukenta attempts to resume her shopping, discussing her reason for being at the store with an employee and moving away from the lounging woman. The next time the white woman is seen, after a short break in the video, she’s back to shrieking and making demands of employees.

When no one acquiesces to her demands that Ukenta stop recording, Karen takes matters into her own hands. She begins to chase Ukenta around the store, bellowing for her to “get away from me” as Ukenta flees between store displays and employees. Even from multiple aisles away, Karen continues to follow Ukenta and shriek for employees to keep her away.

Security is absent through the majority of the video, an issue that was noted by commenters, along with Ukenta herself.

At multiple points throughout the video, other customers bafflingly defend the woman, rather than Ukenta. One woman encourages Ukenta to leave the store, while another tries to shame her into turning off her camera. As Ukenta notes, however, “This is to protect me, once the law gets here, who they going to believe, her white ass or my Black ass?”

The white woman ultimately calls the police on Ukenta, despite the fact that she spent the last several minutes chasing Ukenta around the store. Meanwhile, Ukenta notes that she was only at Victoria’s Secret “to get a free panty.” The woman, seemingly enraged by Ukenta’s note that “this how Black people be dying,” charges across the store at her yet again. She is stopped by the display that Ukenta is partially concealed behind and quickly resumes her panicked phone call with police.

The police finally arrive at Victoria’s Secret in the last several minutes of the video. An officer can be seen encouraging Ukenta to leave and claiming that he has no legal authority to force the white woman to leave.

Ukenta started a GoFundMe seeking assistance with her impending legal fees. She noted, on the GoFundMe, that she was “assaulted and harassed by a white woman and nothing was done by security nor the police.” She intends to use the funds to “hire me an excellent attorney who can help me bring light to this wrong.” In less than 14 hours, she has already surpassed her $20,000 goal by more than $10,000.

“Miss Elphick seemed to acknowledge that she was wrong, saying she was concerned about losing her job and apartment if the video posted online,” the report says. Officers reportedly offered emergency assistance to the white woman, who refused and ultimately voluntarily left with mall security.

The Daily Dot has reached out to Ukenta and Millburn police.