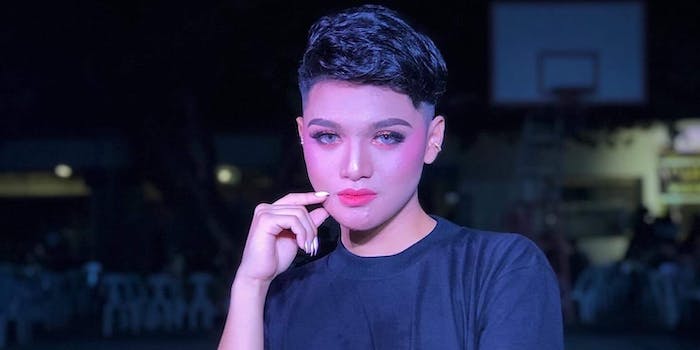 The Filipino artist thanked commenters for their call-outs.

A makeup influencer from the Philippines is facing backlash online for donning blackface in what he claimed was an act of support for the Black community in light of the recent protests for George Floyd.

Ken Francisco de Dios shared a photo of himself in dark makeup and a wig and the caption “Black Lives Matter,” the Daily Mail reported. In the photo, the dark makeup is in stark contrast to the skin color on his arm.

Screenshots shared by other users on Twitter and published by the Mirror UK show de Dios posted a set of four photos, in portrait style, of himself against a background of fairy lights. The photos and de Dios’ Twitter account have since been deleted.

Users shared their outrage on social media. They acknowledged that it’s a crucial moment for allies to show their support with the Black community—but wearing blackface, which is rooted in racism, counters that message.

“See this is what we’re NOT gonna do,” one user tweeted.

According to the Daily Mail, de Dios apologized on Facebook on Sunday.

“I’ve read your comments and tweets and I honestly do understand where this backlash has come from,” de Dios wrote, according to the Sun. “I am thankful for those who are educating me in the comments section.”

His apology was not available on Monday when the Daily Dot ran a search.

The tweet—and the apology—come at the heels of a weekend that saw protests and riots across the U.S. following the killing of Floyd, a Black man, by a white police officer in Minneapolis last week.

Online, protests have sparked another wave of the Black Lives Matter movement with many in the Black community and their allies expressing their support to fight anti-Black racism.