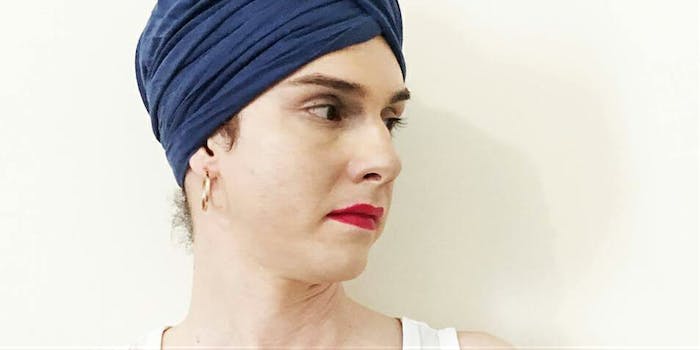 'I’m the happiest I’ve ever been.'

Brooklyn-based electro-rock band LCD Soundsystem is getting back together. And in an interview with Grindr’s Into, band member Gavin Russom has revealed that she is a transgender woman.

Russom, who joined the band after recording 2010’s album This Is Happening, had struggled with her gender identity all her life. She told Grindr (writer Nico Lang is also a contributor to the Daily Dot) that she had always identified “along the feminine spectrum.” But even though she frequently skirted gender roles throughout her life, she found herself unsure of her gender identity early on.

Punk rock promised “freedom and liberation” for her, and Russom quickly became attracted to the scene. That same attraction would later bring her to New York after college, seeing the city’s clubs as a place where transgender people could be open, happy, and unapologetically queer.

“It gives me hope for the future to see the courage and creativity of a much younger generation of trans women,” Russom told Grindr. “Clubs are where I’ve encountered a lot of that.”

I interviewed @gavinrussom of LCD Soundsystem. We both just happened to be in Central Park. This is our meet cute.https://t.co/QKg82L5JZM

Russom began coming out this year. She says that her fellow band members have been “really supportive” about her transitioning and they’re eager to see where the future takes them. And even though the transgender community faces a lot of discrimination, Russom feels happy with the progress she’s made and knows it won’t always be rosy.

“I’m the happiest I’ve ever been,” Russom explained. “but I have my good days and my bad days. On my bad days, it really sucks and I wait until I get home to go to the bathroom—which is such a basic thing.”

On social media, fans and LGBTQ are inspired by and celebrating Russom’s coming out story.

@gavinrussom i want to wish you all the luck in the world with the transition!! were in this together actually. have a great day <3

Russom also joins a long and growing list of out transgender celebrities, including Chelsea Manning, Janet Mock, and Thomas Beatie. Previously, Against Me!’s Laura Jane Grace came out in 2012, opening a larger discussion on trans visibility and acceptance in punk rock at the time.