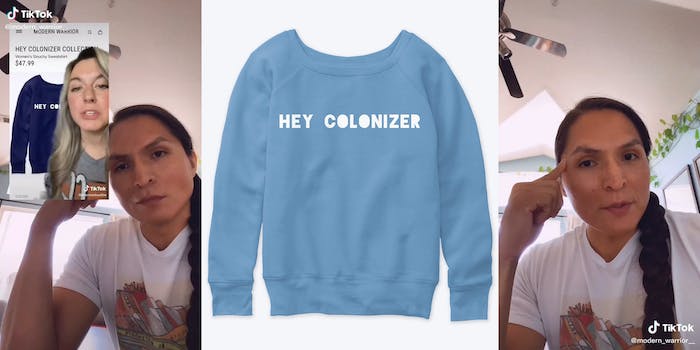 'Talk about cashing in on racism.'

A white woman tried “calling out” a Navajo TikToker for selling merch she claimed is hateful and racist, and he had the best response.

Lance Tsosie has amassed quite the following on the social media platform, often using it to draw attention to issues faced by Indigenous peoples. He also has a link in his bio for people to purchase from a line of “Hey Colonizer” merchandise that he designed.

But some fellow TikTokers have taken issue with this, posting their own videos trying to shut down or mock Tsosie’s videos and merch, with the idea generally being that calling white people “colonizers” for things that happened hundreds of years ago is racist.

One such user, @shamrockonfire, accused Tsosie of profiting off of his “blatant hate for white people.”

But Tsosie wasn’t having it. After thanking the woman for getting more eyes on his merch, he told @shamrockonfire, and any others drawing the same conclusions, that white Americans have been profiting off of Indigenous peoples in a racist manner for a very long time.

“I’m just trying to honor you,” he joked, showing images of merchandise from the football team formerly known as the Washington Redskins.

“This mascot was established in 1933, and after many years of activism, protests, and petitions did the team finally decide to change their name in 2020,” Tsosie added. “Talk about cashing in on racism.”

Tsosie found a lot of support in the comments, as well as people thanking him for continuing to respond to criticisms in such a thought-provoking manner.

“Funny because you didn’t say white, you said coloniser, so it’s literally her identifying as that and getting offended,” @sari_ella_thaiday pointed out.

@kristinamaione theorized that “these ppl have never opened a history book or simply don’t care. White ppl have colonized & oppressed others for centuries.”

“As a white girl, who likes Starbucks, and slippers and shorts, ITS NOT OFFENSIVE IF ITS FACTS!” wrote @muffy.sk.

The TikToker who posted the video criticizing Tsosie’s “Hey Colonizer” merch ultimately responded to his video with an apology.

The Daily Dot has reached out to her and Lance Tsosie.