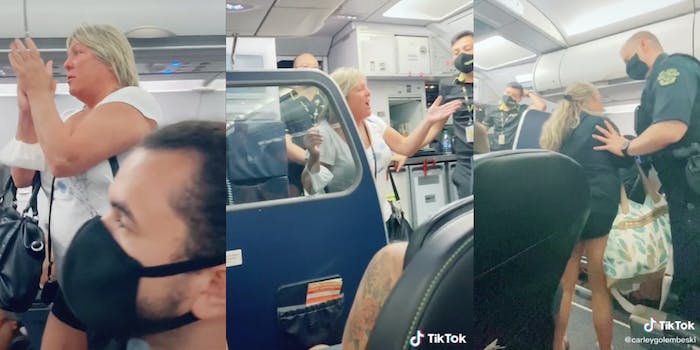 A maskless Karen called being kicked off a plane ‘racism at its best.’ She’s white

In the video, passengers clap as she's escorted off. She even joins in on the applause.

A TikTok video is gaining views after it showed an airplane full of people clapping as a woman gets kicked off, and while the reason she’s removed isn’t clear, it’s likely because her face mask is wrapped around her hand and not on her face.

The video has been posted for less than 24 hours and already has over 200,000 likes. It’s also been posted to multiple subreddits and to Twitter.

“It’s the entitlement for me,” Carley Golembeski, the poster of the TikTok video captioned the clip.

The video shows the woman being escorted off the plane while all the other passengers clap. She joins in on the applause and yells “woo!”

As she gets close to the exit, she turns around and yells back to the plane, “racism at its best.” For the record, she’s white.

She then confronts one of the passengers filming the interaction.

She exits the plane.

But her daughter, who is also maskless and can be seen in the background of previous clips seemingly arguing with airport security, makes her way to the exit before confronting the same woman her mother did.

“Don’t talk to my mother like that,” she yells before airport police shove her off the plane.

“B*tch” and “drunk-a**,” can also be heard from screaming passengers on the flight.

The video has strummed up almost 3,000 comments, many calling out the woman for making a scene.

“What is it about this pandemic that brought out all the Karens?” user thorkium wrote.

“Multiple phones out, I hope all the different angles show up on my FYP,” potswhenidrop added.

Others were quick to point out that the plane was completely full. The video appears to show no seats open on the plane at all.

The Daily Dot has reached out to the original poster of the TikTok video.