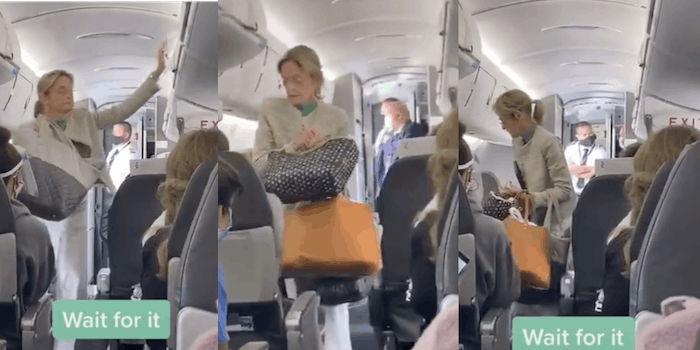 'You can clap all you want!'

A viral video shows people applauding after American Airlines forced a woman to get off the plane after she refused to wear a mask.

Another passenger Jordan Slade took the video and posted it to TikTok. From there, the video migrated this week to Twitter, where it went viral.

“Ole Karen refused to wear a mask on an American Airline flight, so she was kicked off. And then everyone clapped,” Twitter user @BookofJonah wrote alongside the video.

The video shows the woman standing up as the rest of the passengers are seated and ready for their flight to take off. The woman, dubbed “Karen” by social media users, removes not one, not two, but three bags from the overhead compartment and below her seat.

As she heads toward the exit, someone starts to clap. Immediately after, the plane erupts into a roar of clapping.

“You can clap all you want,” the woman turns around to say.

Someone in the plane shot back, telling her to “just leave.”

“We have flights to get,” a passenger can be heard saying in the video.

Slade told the Daily Mail that the woman had been confrontational even before the passengers boarded the plane, fighting with flight attendants and even other passengers who pleaded with her to put on a mask.

The woman said she would not wear a mask because she has a medical condition that prevented her from wearing one.

The video has been viewed on Twitter about 1.4 million times and has thousands of retweets. People said the woman was a perfect example of a “Karen,” or a white woman who acts privileged or racist.

“White privilege much? Allowed to bring on WAY too much stuff. Boarded without mask,” Twitter user @SteveZyck wrote. “If she were a POC she would have had to check bags. Racism doesn’t just cost POC more, it allows white people to avoid paying what they owe.”

Others were focused on how the woman even got on the plane in the first place.

“How did she even get on the plane without one?” questioned Twitter user @clarkeg337. “Why wasn’t she stopped at the gate? Did she have one on to get in the plane but refused to keep it on?”

At the time that the video went viral, American Airlines required passengers to wear face masks unless they were under the age of 2 or had a medical condition or disability that prevents them from wearing a mask.

Since then, the airline has updated its policy so that everyone must wear a face mask. The airline said there will be no exceptions for anyone over the age of 2.