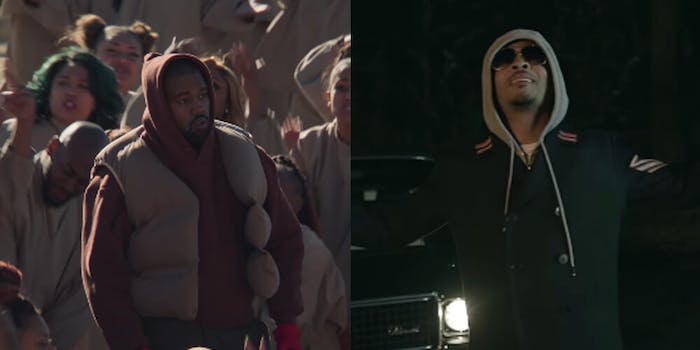 Kanye West appeared to speak out in support of T.I.’s decision to have his daughter’s hymen checked every year, and people are well and truly fed up.

The rapper-turned-gospel-singer held a Sunday service at a Los Angeles homeless shelter this past weekend. An audio clip obtained by TMZ showed West preaching to the masses and complaining about the internet not appreciating things that are “God-approved.”

“I ain’t telling nobody what to do,” West said. “I’m expressing what I been through. ‘Cause you know people love to take a soundbite and say, ‘This was not exactly devil-approved by the internet.'”

In case you were fortunate enough to have missed it, T.I. blew up the internet back in November when he proudly admitted to having his 18-year-old daughter checked annually for an intact hymen. After he realized most people actually consider this to be a horrible invasion of privacy rather than something that’s going to win him a “dad of the year award,” T.I. doubled down, saying he has to “protect mine.”

While it hasn’t been confirmed that West’s “God-approved” comment referred to the hymen situation, it seems quite likely. As one might expect, the internet is fully prepared to drag him for these antiquated, misogynistic views.

“Would it be okay with you guys if we left Kanye in 2019?” one Twitter user asked.

Another wanted to know what West’s wife, Kim Kardashian, would think if Kanye expected to take their kids out for “virginity checks” when they get older.

I’m surprised she has stayed with him for this long.

Basically, nobody was happy with the man who once proclaimed that he himself was God.

KW's mother should have stayed a virgin.

Kanye West really just said that what TI did with his daughter is “God approved”….

Checking a hymen doesn’t prove virginity!!!! It’s a complete myth. Hymens can break in virgins and stay intact after sex. There is no medical “virginity” test. It would be more scientific to give their daughters lie detector tests. (Though equally gross, immoral & sexist)

Ok now that TI got cancelled, can we also cancel kanye west for being okay with the whole hymen inspection thing??? It's BEEN fuck kanye but man…..and yall are gonna find a way to defend him as per usual

Kanye West gets down with Joel Osteen? And he supports TI's hymen check-ups?
I knew I still hated Kanye's ass for a reason

when tf are people gonna stop talking about their daughters hymens. it is fucking weird… and do they come with that same energy with their sons? YALL ARE WEIRD. Fuck kanye and ti.. and trump

Some people insisted West’s comments were about something entirely different, and that he wasn’t calling T.I.’s so-called “virginity checks” “God-approved” at all. However, the perpetually outspoken born-again rapper has yet to comment on the incident.

And really? Knowing Kanye, that’s probably for the best.