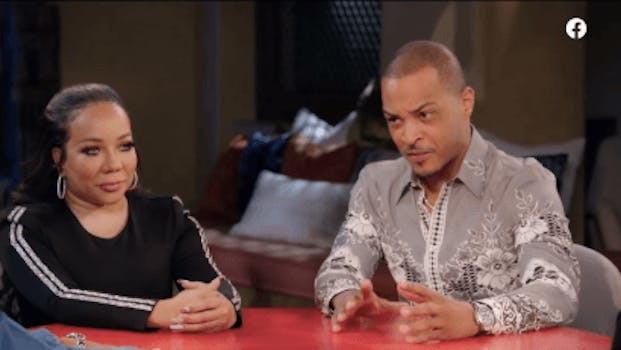 T.I. breaks his silence about checking his daughter’s hymen

'I'm willing to go above and beyond to protect mine.'

T.I. broke his silence since his infamous comment about having his daughter’s hymen checked. But now some people are wishing he hadn’t said anything at all.

Earlier this month on an episode of the Ladies Like Us podcast, T.I. said he takes his 18-year-old daughter, Deyjah Harris, to the gynecologist every year to have her hymen checked. The internet was outraged by this comment and has been dragging him since.

Jada Pinkett Smith brought the 39-year-old rapper on her Facebook talk show, Red Table Talk, to clear the air. The 22-minute episode, posted on Monday, was a roundtable conversation with T.I., his wife Tameka “Tiny” Harris, Jada, and Jada’s mother, Adrienne Banfield. Willow Smith, who usually asks some of the hard-hitting questions, was not present.

Rapper T.I. and His Wife Tiny Set The Record Straight

Rapper and actor T.I. comes to the Table with his wife Tiny to address the controversy around him taking his daughter to the gynecologist to ensure she’s still a virgin. Part 1 of a special 2-part Red Table Talk.

T.I. said he did not understand the sensitivity surrounding this topic and that his intentions and what he said have been misconstrued.

“I never said I was in any exam room,” he said. “Never said the checkups were being done present day as an 18-year-old.”

Tiny said the exams happened when Deyjah was 15 and 16 years old and T.I. was accompanied by Deyjah’s mother, rapper Ms. Niko.

T.I. said he was not trying to control his daughter’s virginity, but rather protect her.

“There’s no such thing as overprotective,” he said. “In this time, Black women are the most unprotected and I’m being criticized because I’m willing to go above and beyond to protect mine—protect my daughter from the slimy, grimy boys who want to defile and destroy the sanctity.”

Jada then asked how it would be different if his son got a girl pregnant versus if his daughter was pregnant.

T.I. is really out here saying it's OK if his sons have sex, because if they get someone pregnant, it won't change anything for 9 months, but if his daughter gets pregnant, it changes immediately. Excuse me while I vomit. #RedTableTalk pic.twitter.com/CnjBBvdihs

Then, digging himself into an even deeper hole, T.I. said he had heard of the term “patriarchy” but didn’t know that it was a real thing. He also added that feminism can be misunderstood as women wanting to silence men.

Jada concluded that there was a key difference in education and control in parenting. She said there are some things a woman will understand that a man won’t ever.

“Every lesson has a purpose,” T.I. said. “We have to have tough discussions in order to move forward.”

But, after seeing this interview, many people believed that T.I. had not learned from this and is still espousing outdated views that historically repress and control women.

The frustrating thing about sexism is when men ask u to teach them so they can learn. These teaching sessions can turn into arguments 2 justify sexist behavior.

In the age of Google, women shouldn't have 2 be gaslit or ask to do emotional labor for men to learn.
#redtabletalk pic.twitter.com/hhgJsfgVmd

At 15:20, TI begins to very clearly indicate that if his daughter was no longer a virgin, he was going to treat her differently, including financial consequences. So, in conclusion, he is trash.
#redtabletalk pic.twitter.com/cAxRwhXF25

The interview had gained 2.8 million views and 11,000 comments in less than 24 hours since being posted.