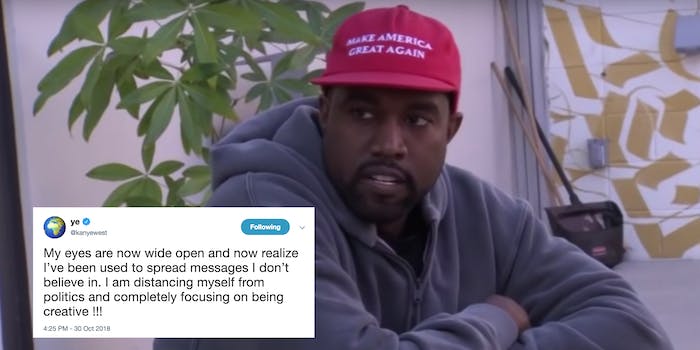 Is the 'old Kanye' back?

In a stark departure from recent events that include donning a “Make America Great Again” cap and meeting with the president, Kanye West on Tuesday tweeted that he’s taking a break from politics.

The rapper, who’s lately going by Ye, announced that he’ll be focusing on his creative work instead.

“My eyes are now wide open and now realize I’ve been used to spread messages I don’t believe in,” he wrote. “I am distancing myself from politics and completely focusing on being creative !!!”

My eyes are now wide open and now realize I’ve been used to spread messages I don’t believe in. I am distancing myself from politics and completely focusing on being creative !!!

It could be the sign of a sharp turn, given Ye’s controversial dive into politics in recent months. Ever since he returned to Twitter in April, he’s been a fountain of thought, spewing takes that have resonated with the far-right and won the approval of President Donald Trump.

Earlier this month, West met with Trump in the Oval Office, where the rapper dubbed his “Make America Great Again” cap “a Superman cape.” Just this week, Candace Owens said West contributed designs for her “Blexit” campaign to urge Black voters to part with the Democratic Party (though West denied this in another Tuesday tweet).

Before that, Ye’s proclamations about the 13th Amendment and support for the president incited strings of condemnation from left-leaning fans and fellow celebrities.

West has also been forthcoming about his struggles with mental illness, but many have admonished him for using that as an excuse to spread harmful political messages. So after his tweet Tuesday saying he’s switching gears to focus on “being creative,” many on Twitter had this response: It’s too late.

Too late. You told me who you were, and I believe you. https://t.co/iezfMqprUs

#Yexit? NOPE! No #Blexit for you from Trump because you’re losing money. You insulted African-Americans openly. You believed every word & embraced nationalists, neoNazis & racists. Stop simpering & deal with your shame like a man. Draw some courage from that #MAGA Hat you love! https://t.co/bHEi3Ohy5t

this isn’t enough. you can’t just back out and hope everything you said and did is okay now. https://t.co/MYTNFWmpru

This is such an incredibly privileged position to have and by no means excuses what he’s done…but I do hope this is sincere and that someone finally got to him. https://t.co/Wg1omDjGC5

You're a fuckin sucker if you believe this for a second. This clown knew what he was doing the whole time. https://t.co/BOFpfQ0BSl

People also speculated that West could finally be feeling the heat—or a lack thereof—in his earnings. His summer album Ye enjoyed the No. 1 spot on the Billboard 200 before a sales plummet in its second week.

Many have guessed his foray into politics was all a ruse to hype his sales in the first place.

You're a fuckin sucker if you believe this for a second. This clown knew what he was doing the whole time. https://t.co/BOFpfQ0BSl

And though there was chatter that West’s politics were making his Yeezy sneakers easier to come by, as Vox reported, this had more to do with Adidas’ marketing strategy on the most recent release.

Regardless of the impact on his own image (or bank account), West is inextricable from his wife Kim Kardashian and her family of influencers. As many riffed on Twitter, it’s easy to imagine Kris Jenner’s concerns about branding had something to do with this.

“now read that back to me” pic.twitter.com/mf3Pf2pS2M

*kanye screaming in the corner through a ball-gag*

No matter what it was inspired by, and despite the lack of specificity in what “messages” he no longer believes, some are hopeful that Ye’s tweet signifies a genuine change of heart. They’re waiting for a return to the “old Kanye,” the pre-MAGA Kanye, the music-only Kanye.

Others? Not so much.