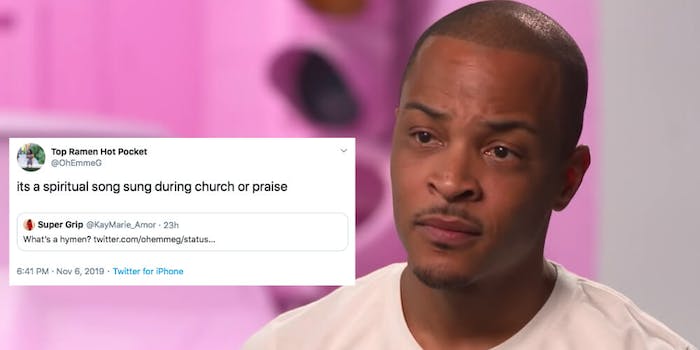 ‘That’s not a hymen’ meme is here to troll T.I.

'It's a spiritual song sung during church or praise.'

The internet is fuming after rapper T.I. revealed that he takes his daughter to the gynecologist annually to check that “her hymen is still intact,” ensuring she’s still a virgin–even though that’s not how hymens work.

Examining the structure of the hymen as a test of virginity has been proven inaccurate and denounced by the World Health Organization (WHO), UN Human Rights Council, and UN Women, according to the Guardian. Even doctors tried to tell T.I., by his own admission, that a hymen can be broken by things unrelated to sex.

“They come and say, ‘Well, I just want you to know that there are other ways besides sex that the hymen can be broken like bike riding, athletics, horseback riding, and just other forms of athletic physical activity,'” he said while on the Ladies Like Us podcast. “So I say, ‘Look, Doc, she don’t ride no horses, she don’t ride no bike, she don’t play no sports. Just check the hymen, please, and give me back my results expeditiously.'”

Once Twitter found out T.I. participates in the practice of “virginity testing,” the trolling began. In an extensive thread, Twitter users are correcting each other on the definition of “hymen.”

It all started with a tweet in which a user asked, “How yall hymens doin tn?” Another user responded with another question: “What’s a hymen?”

In response to the question, one user wrote that a hymen is “a spiritual song sung during church or praise,” to which another responded, “That’s a hymnal. A hymen is like one of those wild cats in Lion King.”

Each meme following inaccurately corrects the proceeding tweet with a word that remotely sounds like hymen followed by its obvious definition. Other examples include fireman, cayman, highway, and even hike.

its a spiritual song sung during church or praise https://t.co/TJxQOXq2eV

That’s a hymnal. A hymen is like one of those wild cats in Lion King. https://t.co/ARrEGNLtq3

that's a fireman. a hymen is a long walk usually undertaken by a group of people on a trail, sometimes taking several days to complete https://t.co/FfGHzIK5kv

no that's a hike. a hymen is three islands in the Caribbean https://t.co/ym9jsfUNKq

Those are the Caymans. A hymen is what life is, something one wishes to drive on “all night long.” https://t.co/9V6tqYfzLr

After news that T.I. takes his 18-year-old daughter to the gynecologist for hymen checks broke, Planned Parenthood, a reproductive health care nonprofit, jumped into the conversation to set the record straight.

“Idk who needs to hear this but virginity is a made-up social construct, and it has absolutely nothing to do with your hymen,” Planned Parenthood tweeted.

Idk who needs to hear this but virginity is a made-up social construct, and it has absolutely nothing to do with your hymen.