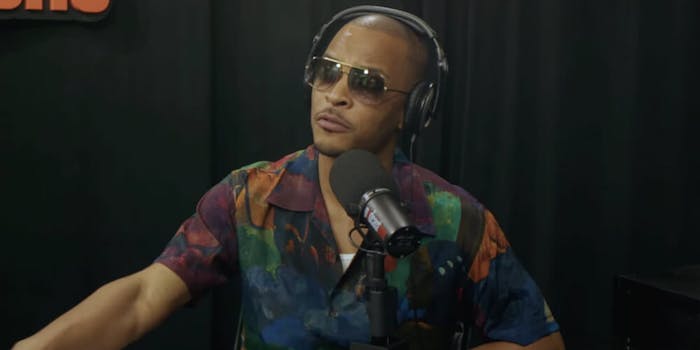 People are creeped out T.I. takes his daughter to the gynecologist yearly to check her hymen

'I will say as of her 18th birthday, her hymen is still intact.'

I think we’re all familiar with the overprotective dad trope, but it appears rapper T.I. is taking things to the extreme.

Speaking on the “Life Hacks” episode of the podcast Ladies Like Us with Nazanin Mandi, the 39-year-old rapper opened up about his parenting style and admitted he takes his teenage daughter, Deyjah Harris, to the gynecologist every year to make sure she’s still a virgin.

“Deyjah’s, 18, just graduated high school now and she’s attending her first year of college, figuring it out for herself,” the rapper continued. “And yes, not only have we had the conversation about sex, we have yearly trips to the gynecologist to check her hymen.”

As one might imagine, the internet is up in arms.

“T.I, a man who publicly & infamously cheated on his wife on a regular basis with no respect for his family while being accessible community dick, made himself the protector of his daughter’s hymen?!” Twitter user @hausofriya wrote. “Won’t let her fuckin ride a bike to keep it intact? This man is a sick psychopath.”

T.I, a man who publicly & infamously cheated on his wife on a regular basis with no respect for his family while being accessible community dick, made himself the protector of his daughter’s hymen?! Wont let her fuckin ride a bike to keep it intact? This man is a sick psychopath. pic.twitter.com/TZ2sjwxbPZ

T.I. is disgusting to discuss his daughters sex life

Then to have the double standard of being ok with your 15 year old son having sex. And like, are you gonna beat her ass if she did?

And this feels like that "I didn't want a daughter bc I treated women like trash" bs.

This is absolutely disgusting and perverted and vile and ignorant and just plain wrong. TI is a sick, controlling narcissist and there is absolutely NO way Deyjah, her mother or any woman in TI’s life should be okay with this. https://t.co/tDjVdAoSom

As the hosts of the podcasts chortled at the revelation of how the rapper—uh—parents, he dug himself a bigger by explaining what happens during these annual exams.

“So it’s this one time we go, I think this might have been after [her] 16th birthday. This is what we do. Right after the birthday we celebrate,” the rapper explained. “Usually like the day after the party, she’s enjoying her gifts. I put a sticky note on the door: Gyno. Tomorrow. 9:30.”

To make matters even grosser: He checks the results of the pelvic exam himself.

While it’s clear the rapper equated a broken hymen to not being a virgin, he said doctors have explained to him that there are other ways besides sex the hymen can be broken, including bike riding and horseback riding.

But T.I. doesn’t believe that’s a plausible reason for why his daughter’s hymen might not be intact.

T.I. said he thinks his daughter remaining a virgin will make it harder for her to get a guy to stick around because virgins are “no fun.”

Though T.I.’s method of parenting his daughters appears intrusive and disgusting—to put it lightly—he doesn’t appear to hold his sons to the same standard. (Shocker.) In a recent season of T.I. & Tiny: Friends & Family Hustle, Tiny finds out that her high school son King is not a virgin.

T.I. proudly stating he goes to the gyno with his daughter to make sure she's a virgin is disgusting. It's upsetting me that he's putting this out there like it's a genius parenting tactic. Your daughter's vagina does not belong to you. WTF.