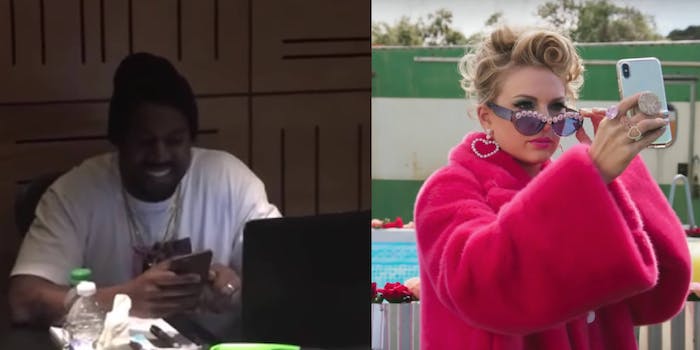 The new recording proves West didn't tell Swift he would be calling her a 'b*tch' in his song.

Taylor Swift is back on her throne after a leaked conversation showed she was telling the truth in the 2016 feud against Kim Kardashian and Kanye West.

Friday night, leaked footage of a conversation between West and Swift was uploaded to Twitter. The chat alleges to give the real account of a controversial incident that occurred in 2016.

In 2016, Swift received backlash after going on record claiming she did not give permission for West to use raunchy lyrics about her in his song, “Famous.” Kardashian posted parts of a phone conversation between West and Swift to dispute that claim. West and Kardashian, ultimately won the internet jury.

The newly leaked evidence shows the jury may have gotten it all wrong.

The new recording proves that West didn’t tell Swift he would be calling her a “b*tch,” which is what she has long had a problem with. In his song, he says, “I made that b*tch famous,” referencing Swift.

Just before midnight, a Twitter user, who goes by the handle @redligion, uploaded a three-part thread of the conversation.

“KIM K AND KANYE AND THE MOST DESPICABLE, GROSS AND MANIPULATIVE PEOPLE IN THE INDUSTRY THEY LIED ABOUT TAYLOR SWIFT IN 2016 AND THIS THREAD OF THE LEAKED PHONE CONVERSATION WILL SHOW YOU THAT,” they wrote.

Fans were not happy they were seemingly duped by Kardashian and West, with some even calling it the exposé of the decade.

“He didn’t just ‘fail’ to mention it. He DELIBERATELY didn’t do so. EXPOSÉ OF THE DECADE.”

Many dubbed West a “monster” and “manipulative liar.”

“BREAKING NEWS : Kanye West has been tested POSITIVE for being the greatest liar of all time. As you can see he isn’t suprised,” user @likepaperrings tweeted.

Some Swift fans even called for revenge, leading the hashtag #KanyeWestIsOverParty to trend on Twitter.

“SWIFTIES ITS WAR,” one declared.

Other Swifties were just happy the truth was finally out and rallied around the pop icon.

“We knew from the very beginning and saw through their BS. So glad the rest of the world knows now too and won’t be able to ever again hold this against her,” one fan tweeted.

A Swift stan account shared a quote from Swift during her 2016 Grammy acceptance speech.

“I want to say to all the young women out there, there are going to be people along the way who will try to undercut your success, or take credit for your accomplishments or your fame,” it wrote.