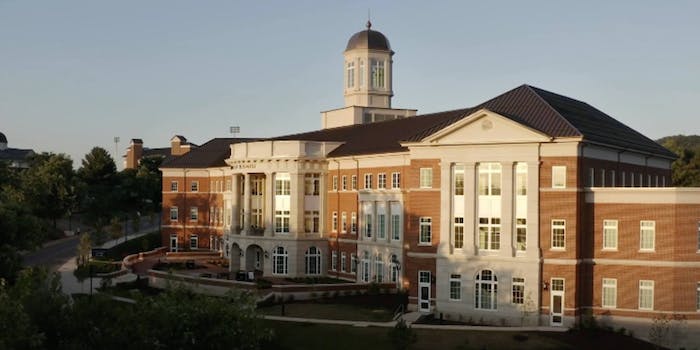 'I cannot...encourage people to attend a school with racially insensitive leadership.'

Liberty University Black staff and faculty members are resigning after President Jerry Falwell Jr. made a racist joke in late May about blackface and the KKK.

After the local government in Virginia mandated face masks in public places, the university president tweeted an image of a mask that had a photo printed on it of someone in blackface and another in a KKK hood, saying this was the mask he’d be wearing.

Falwell Jr. is a staunch supporter of President Donald Trump and was against the use of face masks despite the coronavirus pandemic. He reportedly posted the picture two days after George Floyd’s death, according to the New York Times.

After about two weeks of pushback and staff members’ very public resignations, Falwell Jr. issued an apology on Twitter on Monday. He claimed to have been trying to remind people of racist history.

“I understand that by tweeting an image to remind all of the governor’s racist past I actually refreshed the trauma that image had caused and offended some by using the image to make a political point,” he wrote on Twitter. “I have deleted the tweet and apologize for any hurt my effort caused, especially within the African American community.”

Keyvon Scott, a Black admissions counselor at the university, went viral on Monday morning after resigning because he couldn’t encourage others to attend a school with “racially insensitive leadership and culture.”

“It is a poor reflection of what Jesus Christ requires of us,” Scott wrote of the school.

At least one professor has also resigned amid the backlash.

In addition, there is a student-led movement against the university professor. A group of at least 30 Black students called for the president to step down.

“There are many Christians of color who worship in our churches and communities; we will not recommend their attendance at L.U.,” the students wrote in a letter that’s since been circulated on social media.