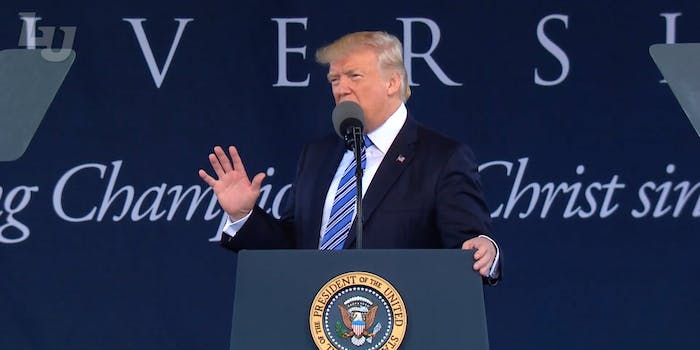 This speech was a stark difference from his presidential persona.

On Saturday, the 2017 graduating class of Liberty University listened to a commencement speech from President Donald Trump, whose words on refuting critics and defying impossibility echoed in reaffirmations in his own path to the White House.

Unlike his campaign rallies and his post-election “thank you” tour, Trump traded in the hyperbolic hysterics for talking points of religious freedom and perseverance during his first commencement speech as president, at times alluding to the “independent” route he’s attempted to implement as president.

Trump also commended war heroes and athletes, and at one point read off Liberty’s 2018 football schedule, a commendation of the future of the university’s athletic program.

“You aren’t going to let people tell you what to believe, especially when you know that you’re right,” Trump told the graduates lining the football field and the guests seated in the stadium, a total of 50,000 in attendance. He continued, saying, “We don’t need a lecture from Washington on how to lead our lives … In America, we don’t worship government—we worship God.”

“America is better when people put their faith into action. As long as I’m your president, no one is going to stop you from practicing your faith or preaching what’s in your faith,” Trump said.

Though Trump momentarily hinted to his own experience, even at one point tipping his hat to the attendees who voted for him for president, much of his speech centered around the protections of religion in the United States—Liberty is a Christian institution founded by famed televangelist Jerry Falwell, whose son is the current chancellor—as well as the importance for graduates to found their own journeys to success.

“Being an outsider is fine, embrace the label, because it’s the outsider” who makes the difference, Trump said. He continued, “The more that a broken system tells you you’re wrong,” the more you should continue pushing onward.

Watch the full Liberty University commencement ceremony and Trump’s speech (at 2:31:00) below: