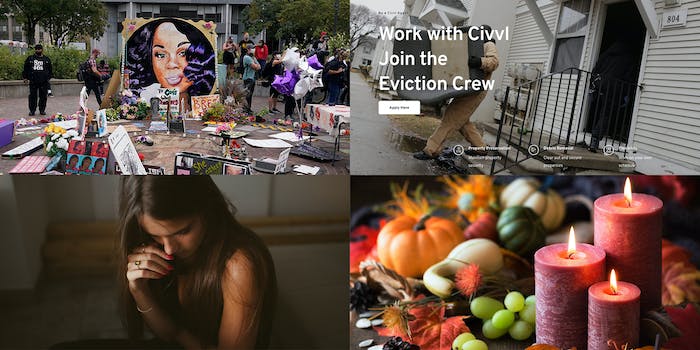 Plus: Domestic violence rates spike amid the coronavirus pandemic.

Kentucky natives including George Clooney and Black Lives Matter activists across the country on Wednesday expressed their anger and disappointment at the officers’ charges, or lack thereof, following the killing of Breonna Taylor. Today:

People online were in an uproar Wednesday over the charges filed against a former detective involved in the shooting death of Breonna Taylor, who was fatally shot in her bed by Louisville, Kentucky, police on March 13 during the execution of a late-night no-knock warrant. (Authorities claim that officers did knock.)

On Wednesday, the grand jury’s recommendations in the case against the officers involved in the shooting was announced. Former officer Brett Hankinson was charged with wanton endangerment for shooting into an adjacent apartment. The other two officers were not charged.

How legit is Civvl, the gig economy company for evictions?

A whistleblower complaint alleging “forced hysterectomies” Immigration and Customs Enforcement facility in Georgia created a firestorm in headlines, but a closer inspection of the complaint reveals deficiencies in the reporting now circulating. A few believe the allegation itself—whether true or not, which is far from clear—is being amplified by nefarious actors, potentially foreign.

From cloth to surgical, masks are everywhere now. But not all masks provide the same levels of protection. If you’d like to understand each type of mask and how well it protects you, our guide can help––but the TL;DR is that surgical masks are the safest option you can buy. If you’d like to purchase them from a reliable source (and that’s not Amazon), Armbrust USA makes an excellent one. They are an American manufacturer of FDA-registered, ASTM Level 2-rated, disposable surgical masks made in Austin, Texas. Armbrust supplies millions of masks a week to hospitals and state governments. But they also sell direct to the consumer. So if you want to be as safe as possible, this is the mask to buy.

Domestic violence statistics are surging during the COVID-19 pandemic

Since lockdowns first began at the start of the COVID-19 pandemic, advocates for domestic abuse victims have sounded the alarm that calls to stay home could increase cases of intimate partner violence. Now, reports of domestic violence have spiked in many countries around the world.

The Washington Post reports that 54% of women surveyed by CARE in Lebanon reported increased violence and harassment during the pandemic. Meanwhile, the Post says domestic violence reports more than tripled in China’s Hubei province during lockdown in February.

SELF-CARE: PUMPKIN SPICE AND EVERYTHING NICE

Even when it’s not six months into quarantine, it’s hard to feel the seasons change in Texas. Occasional cold fronts often give way to 90-degree sunshine, and October’s Austin City Limits music festival is somehow always sweltering. But even if autumn doesn’t mean crisp winds and changing leaves, there’s still something comforting about lighting a cozy scented candle, putting out ceramic pumpkins, and switching from iced to hot tea for my bedtime beverage. Thrift stores are a great place to find seasonal decor, and if you’re a PSL kind of person, it’s time to stock up on flavored coffee creamer. Fall tends to be the busiest time of year for many, and especially amid a pandemic, I’ll take all the pumpkin spiced self-care I can get.

“Our elf is Peaches. She does not dance on poles.”

—Tiffany Bennett, director of operations, on an Elf on the Shelf-themed pole dancing routine