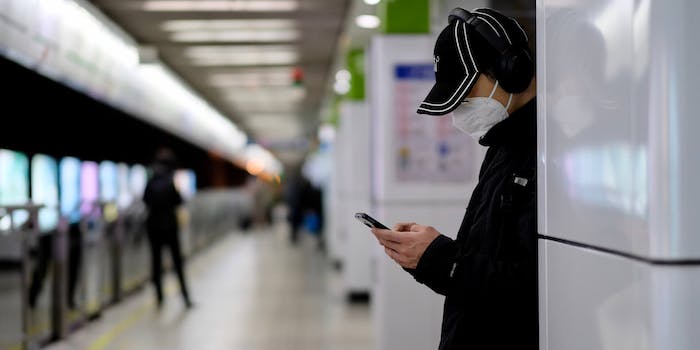 Just months after they arrived in their new city, it shut down.

Wuhan, China, might seem like a ghost town from afar, but millions of people still call the quiet city their home. Among its residents are Russian models who have been Instagramming the city at the epicenter of the coronavirus epidemic. Their posts are a surreal window into the isolated city, which has been on lockdown since Jan. 23.

Wuhan might seem like a strange place to find Russian models, but the foursome had been living there for months. Nadia, Evy, Tanya, and Olesya first relocated to the city last August after finding work with local modeling agencies, according to the Daily Beast. Shortly after they arrived in their new city, it shut down. Their places of work are dark, and there is no end to the looming crisis in sight.

When evacuation was offered, only one of the four got on a plane. Nadia ended up on a military transport to Tyumen, Russia, rather than heading back home to Moscow. In an interview, she told the Daily Beast that after arriving, she spent two weeks behind locked doors. Until travelers received the results of their tests, no one was permitted to wander.

While Nadia was waiting to be allowed to enter Tyumen, her friends in Wuhan were still waiting for their city to reawaken.

More than a month after it officially shut down, however, Wuhan’s streets are still empty. Posts from the models—black face masks often included—show the once-bustling city with closed doors, dark windows, and vacant walkways.

Despite the city’s shutdown, Evy, Tanya, and Olesya are glad they stayed. They told the Daily Beast that they’d rather remain in China than return to “freezing cold” Russia. “Chinese doctors know how to treat coronavirus, so we thought we would be better off here than quarantined in some Soviet sanatorium,” Evy told the Daily Beast.

Last week, Evy told the Daily Beast that finding supplies is getting harder. “Until recently we could go shopping at a local supermarket three times a week, but today our security guard refused to let us out,” she said. “We have some chicken and eggs in the fridge but we are running out of bottled water.”

The models have heard of the chaos unfolding in the city but have witnessed none of it themselves. People may be, as the Daily Beast reported, “fighting over coronavirus treatment at Wuhan hospitals” while people drop dead in the streets, but if so, none of the models have seen it.

What they have seen is a wave of hate aimed at them from the residents of their home country. “It was a different kind of nightmare,” Evy told the Daily Beast. “We got ugly, hateful comments on social media from Russia, people wishing us to die, insulting us for going to work in China, labeling us as ‘escorts.'”

For Nadia, finally out of quarantine, distance does not diffuse the trolls. She, too, has been receiving hateful comments. None of them have escalated to the death threats some of her friends have endured, but the messages keep coming. Nadia’s employer, modeling agency Gosh Model, told the Daily Beast that “she is a talented and hard-working model with a big future.”

Back in Wuhan, her friends are hanging on. They say their Chinese friends have been good to them, and the situation has served as an inspiration. According to the Daily Beast, Evy may provide a permanent first-hand account of life in Wuhan during the virus.

“One day I am going to write about this Groundhog Day life in the time of coronavirus,” she said.